MXC and Expressways in the Philippines

Expressways are infrastructures built to reduce a motorist’s costs, time, fuel, and energy by connecting two or more places with a highway. MCX is one of them. These are characterized by their notable controlled entrance and exit points, as well as the dividing strips between opposing lanes. It ensures a smooth, safe, and convenient for motorists.

What is the Muntinlupa-Cavite Expressway | MCX?

The Muntinlupa-Cavite Expressway (MCX), formerly known as Daang Hari–SLEX Link Road, was established in 2015. It is the first Public-Private Partnership Project under the administration of the late former president Benigno Aquino III. This project holds a significant part in the development of our country, as public-private partnerships are all about delivering the right services to the country’s people.

Logo of the MCX Tollway | Photo from MCX Website

Features of the Muntinlupa-Cavite Expressway

The Muntinlupa-Cavite Expressway is signed as E2 of the Philippine Expressway Network. It has a 4-kilometer main road that connects to suburban towns of Cavite to Metro Manila. It has a 4-lane expanse that lessens the vehicle congestion on the nearby roads and avenues, mainly Daang-Hari Road and Commerce Avenue. These driveways usually had a queueing time of more than 1 hour, which made it a very time-consuming. The expressway avoids these kinds of busy routes in the Alabang business district, making it much more efficient, especially for those from Bacoor, Imus, Molino, and General Trias. The MCX became a great way to let motorists save much more time and fuel. 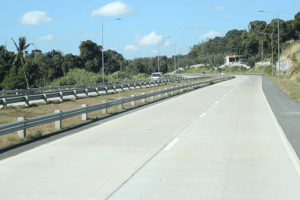 Route Description of the Muntinlupa-Cavite Expressway

The expressway has opening roads to key industrial zones, with its main entrance and exit at the South Luzon Expressway (SLEX) and Daang Hari Road. The SLEX entrance of the expressway consists of a T-interchange near Susana Heights, located in Muntinlupa City. On the other hand, the exit is a roundabout with Daang Hari, Daang Reyna, and Biazong Road. 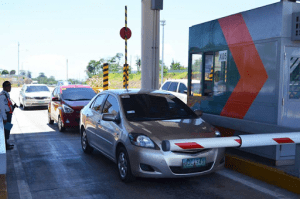 The road following the entrance is slightly curved, parallel to the Magdaong River. The Magdaong River is a stream that stretches all the way from Rizal and serves as the boundary between two barangays in Muntinlupa, Barangay Poblacion and Tunasan.

Map of the MCX

Below is a map of the Muntinlupa-Cavite Expressway provided by Schadow1 Expeditions to guide you when taking the expressway. The high-resolution image can be found here. 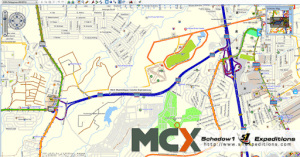 Toll fees are unavoidable to maintain the operations and management of any expressway. At the toll barrier of the MCX, the fees are assigned according to the vehicle’s class. All toll rates of the expressway already include an 12% Value Added Tax. A guide to calculate the fees per class are listed below: 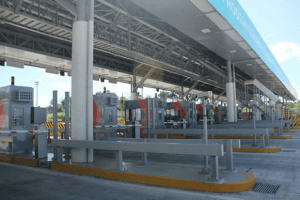 The Muntinlupa-Cavite Expressway implements both cash and cashless methods for its toll booths. Cashless methods of payment are done through the Electronic Toll Collection (ETC) System, which consists of the Autosweep RFID. This uses RFID Technology, and is highly encouraged, especially during this pandemic. This collection system is much more efficient and is currently being used in other expressways as well, such as the South Luzon Expressway (SLEX) and Ninoy Aquino International Airport Expressway (NAIAX).

Establishments Nearby the MCX

Establishments Near the Entrance of the Expressway 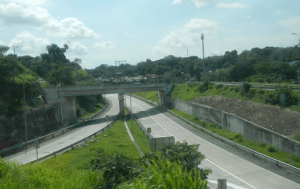 Although the main purpose of the expressway is to connect the two cities at their ends, an exit can be found part-way. This exit is located at Poblacion, Muntinlupa. T

The vicinity of Southville 3 is also located near the Muntinlupa-Cavite Expressway. An education institution, Southville High School, is located approximately 750 meters away from the same exit point of the expressway. A 10-minute drive is sufficient for a vehicle exiting the expressway to reach the educational institution. Talk about fast!

Another notable establishment near the expressway is the Bureau of Corrections Firing Range, or shorty known as BUCOR Firing Range. The sport facility is located on Insular Prison Road, Muntinlupa City. It is approximately 650 meters away from the nearest exit point and would take around an 8-minute drive to reach the facility. 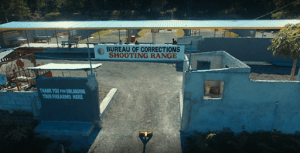 The Bureau of Correction Firing Range | Photo Courtesy of Juncatz 05

Establishments Near the Exit of MCX

Cavite awaits the opposite end of the Muntinlupa-Cavite Expressway. A Caltex Gas station is located near the exit of the expressway, just before the roundabout exit at Daang Hari, Daang Reyna, and Biazon Road. Be sure to get your tanks ready since there’s a lot that awaits you over ahead! 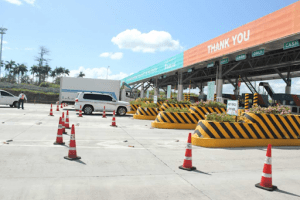 The shopping lifestyle center dubbed as the “Crown Jewel of the South” is located insanely close to the MCX exit. Evia Lifestyle Center is located on Daang Hari, only a few meters away from the roundabout exit of the expressway. The establishment is home to numerous businesses ranging from clothing to the most luxurious restaurants – you’ll find an activity perfect for you. Not to mention its most aesthetically pleasing architecture, the center is a sight truly for the eyes. 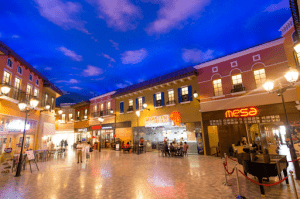 Palazzo Verde boasts its most elegant estate that remains the most sought-after wedding and events venue in the metro. Serving world-class service, Palazzo Verde is a magical place you’ll want to be in once you’ve laid your eyes on it. A shining gem in the south, the venue is located on Daang Reyna – just a few more meters after the Evia Football field when coming from the Muntinlupa-Cavite Expressway. 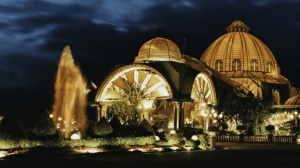 Portofino is an award-winning flagship development project of Brittany – the Philippines’ lead luxury real estate developer. Housing only the most elegant luxury homes in Daang Hari, Portofino is a world-class luxury house and lot. A picture-perfect description of the most beautiful houses in the Philippines, the Italian architecture Portofino boasts makes one lost in the vicinity. 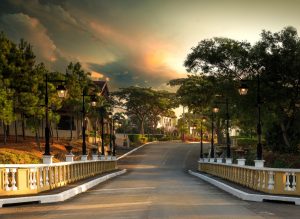 The Breath-takingly Beautiful Scenery at Portofino

Suggested Read: The Most Luxurious Condominiums in the World | Brittany Luxury Homes

The comfort brought by Portofino is unlike any other. Portofino ensures that you’ll be at your best with its pools and courts found in every enclave, along with numerous other amenities. Security is not taken lightly either. With the highest level of security and 24/7 roving patrol, the safety of the homeowners is priority. Who says you can’t have both a beautiful and relaxing yet safe place to comfortably live in? 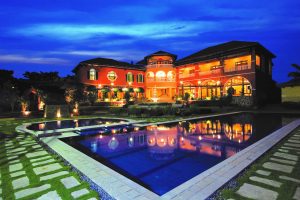 One of the Amenities Offered at Portofino – the Clubhouse 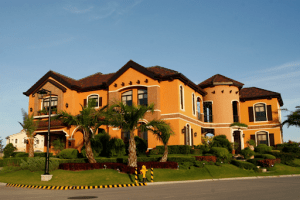 Michelangelo – One of the House Designs and Architecture Found in Portofino

Villar Avenue is an exclusive road accessible only to Vista Land communities in Vista Alabang. It is a 4-lane national highway that connects Las Pinas and Bacoor, Cavite. The avenue greatly helps relieve traffic from nearby areas such as Daang Hari and Molino, Bacoor, Cavite.

The River Drive is a whopping 25-kilometer diversion road with 4-lane access from Zapote, Las Pinas, and MCX to CAVITEX. This project can shorten greatly the travel time it takes for motorists from CAVITEX to MCX. The new travel time is estimated to be 25 minutes.

If the existing road infrastructures aren’t enough for you, there’s still a whole lot of other projects currently ongoing that will make it even more convenient for you to travel around!

Skyway Stage 3 is a planned 18-kilometer elevated skyway to link NLEX AND SLEX. This Stage 3 aims to cut the travel time between the two major expressways to approximately 30 minutes. The Skyway Stage 3 is currently formally open to the public. Vista Alabang is very accessible to this road infrastructure via the MCX to the Skyway Extension Susana Heights Northbound Ramp. 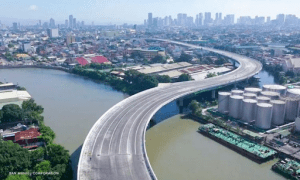 An insanely long 44-kilometer-high speed road network that is expected to lessen congestion on several other road infrastructures nearby its path, such as Governor’s Drive, Sta. Rosa-Tagaytay Road, and Aguinaldo Highway. The expressway aims to half the travel time from CAVITEX to SLEX from 90 minutes down to 45 minutes. As of July 25,2021, Laguna is 100% complete while Cavite is 5.66% complete. The expressway is expected to finish in 2022. 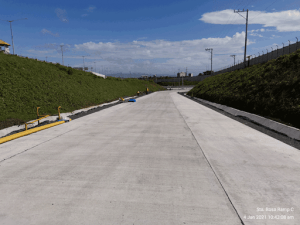 NEXT READ: The Complete Guide to the Cavite-Laguna Expressway

NEXT READ: The Most Luxurious Homes in the World