The Most Luxurious Condominiums in the World

Having extensively large properties and grand mansions are undeniable marks of an affluent life. Undeniably, owning a unit at one of the most luxurious condominiums in the world is an almost surefire way to tell that someone comes from the finest walks of life.

How did condominiums become so popular? In metropolitan areas especially, vertical developments like condominiums, which truly embody the saying “The sky’s the limit,” are the most optimal option for both tycoons intending to expand their businesses and urban dwellers looking for residences near their workplaces.

And like all things, condos also have their luxurious counterparts. Here are some of the world’s most luxurious condominiums. 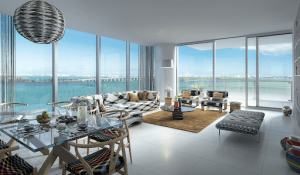 With its strategic waterfront location and its appealing amenities, this skyscraper home that cuts through the Miami skyline is a wonderful treat for the upper echelons of society.

Visitors will be amazed at the stately porte-cochere and the marble-graced towering lobby that welcome the residents. The condominium’s 249 luxury units have 1-5 bedrooms each, and all of them have majestic views of the city, Miami Beach or the Atlantic Ocean.

Meanwhile, the bayfront amenities that overlook Biscayne Bay and Downtown Miami include the lounge pool, fitness gym, residents-only spa, and the water play zone for kids. There are also off-site amenities such as exclusive access to Grand Bay Club in Key Biscayne.

If you want to get your hands on one of these units, the most affordable 1-bedroom units start at $700,000, while the most expensive 5-bedroom ones can sell for around $4 million pre-tax. It’s well worth every penny since staying at Missoni Baia is a great way to enjoy luxurious Miami living. 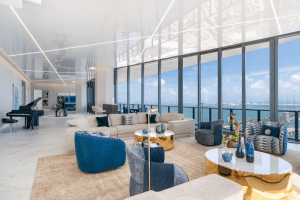 If you’re looking for the most luxury condominiums in downtown Miami, you can check out One Thousand Museum.

Priding itself in the fusion of art, architecture, design, and sophistication, you can expect the luxury condos for sale in One Thousand Museum to be of unprecedented magnificence.

To capture the enthralling panorama of the Miami skyline, Biscayne Bay, and the Atlantic Ocean, all the living rooms and bedrooms of these luxurious condominiums and even the entertainment spaces are designed with East-to-West flow in their floor plans.

In addition to the usual amenities such as the waterfront indoor pool and wellness spa, One Thousand Museum also boasts its European kitchen and bathrooms, and state-of-the-art home automation for lighting, heating, airconditioning, window treatments, audio and video, and security.

Units at One Thousand Museum start at $6.6 million. In May of this year, a penthouse sold for $18 million, the second most expensive sale at the condominium since its establishment. There are only 83 units in total though, so you better be quick if you want one for yourself. 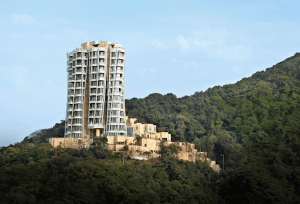 Are privacy and exclusivity your requirements for your ideal luxury condominium? If so, look no further than Opus in Hong Kong.

Designed according to its unique location and conditions, the Opus tower is extremely exclusive to its residents. It has a total of 12 units. At the lower levels, there are two double-level apartments with their own pools. At the upper levels, there are ten floor-wide units with shared access to the rooftop swimming pools.

With its helical external structure, the serpentine facade of the building is almost entirely made of glass, resulting in a light and airy interior and almost panoramic views of the surrounding environment.

The Hong Kong skyline can be seen from the balconies of the residential units. The building also strikes an extraordinary silhouette against the green mountains when viewed from the city.

The 5,444-square foot “Presidential Unit” found at the topmost floor sold for $66 million in 2015, the most expensive condominium unit ever sold in Asia at the time.

If you’re looking for a Philippine equivalent, Brittany’s Crosswinds also offers private and luxurious condominiums in the upland of Tagaytay, surrounded by homegrown pine trees. From here, you are away from the bustle of Metro Manila but near enough to not become totally detached from urban living. 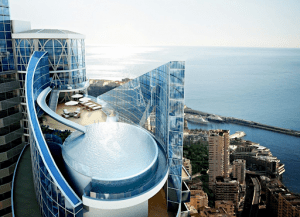 Above the waters of the Mediterranean rises the regal La Odéon. Also known as the tallest building in Monaco, La Odéon houses its luxurious condominiums on its 20th through 49th floors.

With 60 apartments, two sky duplexes and a majestic penthouse, this exceptional architecture overlooking bustling Monaco is the ultimate Mediterranean dream.

In fact, its penthouse is considered the most expensive penthouse in the entire world – sold in 2013 for a whopping $387 million. It encompasses the 5 topmost floors, over 35,000 square footage, 5 main bedrooms, and 3 main bathrooms.

While you’re there, you can even try the Mediterranean diet and immerse yourself more in the lifestyle and food habits of this European region. Here in the Philippines, the luxury homes for sale at Brittany’s Belle Reve, with its French-Mediterranean atmosphere, can be a great option for you. 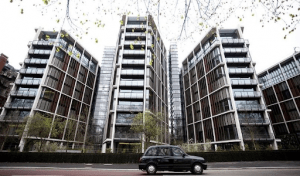 One Hyde Park | Photo from The Sun Co.UK

Dubbed as London’s most exclusive apartment complex, One Hyde Park is located in Knightsbridge, the center of London’s most affluent.

The building includes the usual amenities of luxurious condominiums such as a pool, a spa ran by the Mandarin Oriental, a cinema, an entertainment suite, a library, and even a golf simulator.

Since One Hyde Park is known for being the home to many influential people, security in the building is tight. They have bulletproof glasses, panic rooms, and even British SAS-trained security personnel.

Just this year, a 5-bedroom unit went up for sale for an astonishing $247 million, at least according to industry sources. It was owned by Nick Candy, a real estate developer in London. The unit spanned two stories and 18,000 square feet.

Interestingly, there are no official published prices online for how much One Hyde Park unit costs. If you really want to know, you’ll have to either contact a broker directly or watch out for hushed conversations within affluent circles. 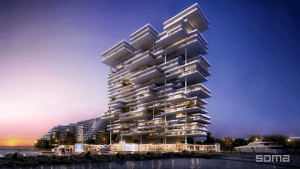 One Palm Jumeira | Photot by Archello

In the heart of Palm Jumeirah, an eye-catching building stands tall. It’s called One Palm, and it’s one of the hottest and most luxurious condominiums in Dubai today.

With many famous 5-star hotels and entertainment venues within its proximity, as well as famous landmarks such as the Burj Al Arab, the Dubai Marina, and the Dubai International Airport, One Palm is a very irresistible residential address if you’re looking for a permanent address in Dubai.

This high-end residential development only has 94 luxury homes for sale, all of which offer views of the Dubai skyline and the Arabian Gulf. Its premium amenities include an outdoor swimming pool overlooking the Arabian Gulf with 24/7 lifeguard services, a play area for children, and a gym for fitness enthusiasts. It even has an outdoor cinema and offers housekeeping services to its residents. 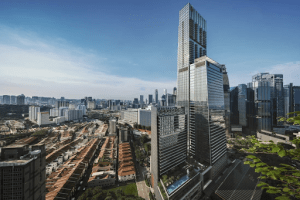 With the tagline “A City Below The Life Above,” Wallich Residence offers a world of possibilities with its luxurious condominiums.

Occupying the highest floors of the Guoco Tower, which also houses the 5-star hotel Sofitel Singapore City Centre, 6 stories of retail podium, and an urban park, Wallich Residence is the grand residential component of this ambitious vertical city. In fact, it’s currently the tallest residential development in Singapore.

With the same architect that designed Dubai’s Burj Khalifa, the same developer as Malaysia’s DC Residensi, the same interior architectural designer as Beijing’s Hilton Wangfujing and the same engineering team as South Korea’s Incheon Grand Bridge, the building in itself already exudes an air of grandiose luxury.

It has a total of 181 luxurious condominiums including four penthouses and one super penthouse. It also features a special integration to the Tanjong Pagar MRT station and four levels of amenities including an infinity pool on the 39th floor, a private library on the 52nd floor, and observation platforms on the 62nd floor.

If you’re considering luxurious condominiums as a retirement home, you can check this Brittany article on what to consider when choosing a retirement home and see if Wallich Residence fits the bill with its ambitious goals for the future. 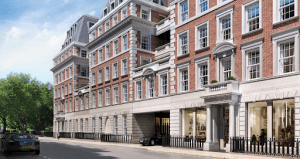 No. 1 Gosvenor Square | Photo by Royist

Formerly the US Embassy and the Canada High Commission, No. 1 Grosvenor Square is now a luxurious apartment complex with a history that can be traced back to 300 years ago.

Originally, it was an aristocratic property built by the Grosvenor family. Now, it’s a grand square London that reflects the timelessness of the city’s heritage and the rich English culture.

From hospitality to household services, health and wellness services including a vitality pool, steam rooms, sauna, private treatment rooms, a gym, and even a yoga and ballet training room to the more complex affairs relating to art, legal, tax, and even immigration concerns, No. 1 Grosvenor Square has it all.

There are 44 units in total at this luxurious condominium. You can have a 4-bedroom one for around $20 million pre-tax. However, just last year, one penthouse sold for $185 million.

If No. 1 Grosvenor Square seems a tad bit too far, you can consider Brittany’s Promenade in Sta. Rosa, an English-inspired development with a countryside manor vibe and hedged cobbled paths. 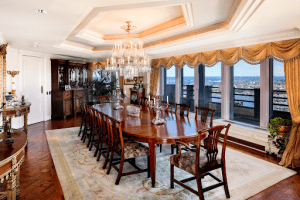 Located in Midtown Manhattan, CitySpire offers its residents prime location, impressive New York City views, and excellent amenities. With its high ceilings and floor-to-ceiling windows, you can get mesmerized any time of the day by the breathtaking city skyline.

Also known as CitySpire Center, it has amenities such as the health club with its pool, sauna, and steam room, garage, conference center, playroom for children, recreation room, and outdoor entertainment space. It also neighbors corporate and commercial hubs as well as landmarks like Central Park, Fifth Avenue, Theater District, and Carnegie Hall.

Certainly, purchasing a unit at CitySpire is an exceptional investment. Prices start at $1.3 million for an 865 square foot unit. That said, in 2012, a listing for an 8,000 octagon-shaped penthouse at CitySpire went up for $100 million, making it the most expensive home being sold in New York at the time 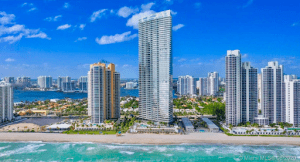 The third luxurious condominium from Miami on the list is the Residences by Armani Casa. From the get-go, it already exudes luxury–guests are welcomed to the building with the shimmering gold tones of the lobby.

Each residence has an expansive 10-feet balcony with glass railings as well as floor-to-ceiling glass windows. It’s impossible not to enjoy the breathtaking views of the Miami skyline and the Atlantic Ocean. In addition, the interior of the rooms has elegant styling as well as intelligent climate controls.

Residences promotes an effortless lifestyle with its spa, fitness center, cigar lounge, wine room, 18-seater private movie theater, and entertainment area among others. If this sounds wonderful to you, you can buy one of its 308 units starting at $1.6 million.

If you prefer the cool air high in the mountains and the peacefulness of forests over the glorious sunlight and tranquil waters, Brittany also offers luxurious condominiums for sale in addition to townhomes, lots, lot properties, and luxury houses in Tagaytay City.

Exploring the Most Luxurious Condominiums in the World

Cities are now expanding vertically instead of horizontally, and these luxury condominiums are proof of that.

While many still prefer house and lot properties, the community, amenities, and accessibility that come with luxurious condominiums make them not just excellent investment opportunities, but also exceptional residences.

Are you interested? Make sure to check out Brittany’s own luxury condominium developments in Tagaytay, like the Alpine Villas and the Grand Quartier!