2021 Fashion brands that made waves

American fashion photographer and writer Bill Cunningham once said that “Fashion is the armor to survive everyday life.” Despite being locked down for more than a year now, the fashion taste of Filipinos is still continuously thriving. No pandemic can stop the fashion sense of people. In fact, there are some who would dress stylish even if they will only go to the grocery store. For some people, dressing up snazzy is a coping mechanism during the pandemic. Fashion is indeed our armor, so let’s take a look at some of the 2021 Fashion brands that shimmered this year.

Ofcourse, who would not be familiar with this curved check mark logo, which is popularly known as “swoosh”? Established in 1964, Nike is an American sportswear company that has retail and distributors in more than 170 countries today. Brazil, Cambodia, China, and Croatia are some of the countries Nike operates in. The sportswear brand would not be as famous as it is today if it weren’t for the endorsements of some athletes, namely basketball player Michael Jordan, professional golfer Tiger Woods, tennis player Roger Federer, and soccer star Mia Hamm.

In the present times, several famous personalities have partnered with Nike. One of their famous collaborations is with South Korean hip-hop star Kwon Ji-yong, or more known as G-dragon. The kpop star redefined the Air Force 1 in his “Para-noise” creation. The shoes unveils a personal artwork of the fashion designer, which includes a daisy embroidered on the tongue and removable custom pins in the upper eyelets. G-dragon believes that art is an important expression of self that pushes culture forward. “Ever since I came across hip-hop as a kid, AF1 has had a meaning greater than just shoes,” he added. 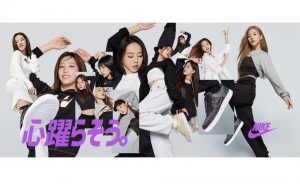 The official poster of the collaboration of Nike & LOONA.

More recently, South Korean girl group LOONA was chosen to become campaign models of Nike’s Court Vision limited edition. It is significant to note that the kpop group consists of 12 members; Haseul, Vivi, Yves, JinSoul, Kim Lip, Chuu, Heejin, Hyunjin, Go Won, Cherry, Olivia Hye, and Yeojin. Starring in a special short film, the idols described the court visions as ““Shoes you want to wear at the moment of excitement in everyday life.” In the film, their Nike shoes accompanied them in dancing and bonding with one another.

For Nike, the world is their community. Nike’s team is empowered, diverse, and inclusive. Last September 2021, the brand released the 2021 Día de Muertos, which is part of the Lucha Libre collection, which recognizes one of Mexico’s most significant traditions. The footwear and apparel collection was Inspired by the fabled wrestling culture, together with the loud masks, rowdy costumes and a dose of competence. In order to bring the footwear to life, the company blended exotic leathers and rich textiles. Meanwhile the apparel comprises two styles of hoodies, and a t-shirt. The graphics and material treatments were borrowed from the Lucha Libre culture, involving masks and posters.

If you know the previous brand, for sure you are familiar with this brand with three stripes.

Derived from the founder’s name Adi Dassler, Adidas originated from a little town in Bavaria Germany. The huge company today actually started out from the wash kitchen of Dassler’s mother. Furthermore, did you know that the company was registered as ‘Gebrüder Dassler Schuhfabrik’ in 1924? It was in 1949 that Dassler renewed the company as ‘Adi Dassler adidas Sportschuhfabrik,’ and employed 47 people.

The German multinational corporation has produced many staples, including the famous Stan Smiths, which made a comeback many years after its release. In 2014, the re-release of the Stan Smith shoes generated publicity from many pop culture figures, including singer Pharell Williams. Other singers, models, and actors can be seen rocking a pair of these shoes.

In 2021, Adidas said that they will own the game. In this strategy, the brand will put the consumers clearly at the center of everything. Adidas acknowledges the role the consumers have in shaping the industry trends. For them, this game plan will catch these consumer-driven opportunities and carve out new ones for their benefit. Once successfully delivered, the strategy will indeed magnify the brand’s credibility.

Today, Korean culture has dominated the world, and Adidas did not miss their opportunity.

The kpop girl group consists of Shin Ryujin, Hwang Yeji, Shin Yuna, Choi Jisu, and Lee Chaeryeong. The idols can be seen sporting their Adidas outfits in their “Loco” dance practice. The midnight fleece campaign is for those who have troubles falling asleep before 12 o’clock. The collection includes a reversible fleece jacket with a water-repellent woven backside. Also, the jacket can be worn according to your mood, since it can be styled in two different ways. 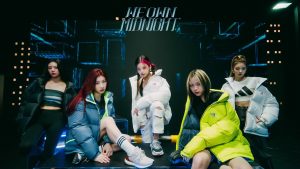 It girls ITZY poses as the main models for the Midnight collection of Adidas.

Enough with the brands famous for their shoes, let’s move on to the company that really focuses on clothes. Established in 1975 as a family business, Zara was founded by Amancio Ortega and Rosalía Mera in downtown Galicia in the northern part of Spain. Did you know that the company was supposed to be named Zorba? But since it was taken, they went with Zara. The Spanish apparel retailer aggressively expanded into global markets, including USA, France, Israel, Norway, Portugal, Mexico, Sweden, Belgium, and even Malta.

Zara’s Vision Statement states ‘To contribute to the sustainable development of society and that of the environment with which we interact.’ In December 2021, fabric made from pollution took the spotlight in the Zara capsule collection. The fast fashion giant formed a partnership with biotechnology company LanzaTech to release a limited-edition line of black party dresses manufactured from carbon emissions. The dress comes in 5 different styles, such as in a little black dress.

Instead of producing more quantities per style, Zara produces more styles, estimated at 12,000 a year. With this said, even if a style sells out very fast, there are the latest styles waiting to take up the space. For Zara, more choices means a higher chance of getting it right with the consumer.

Let’s heat things a bit, and head over to more luxurious brands. Recently, the French couture House Celine has been making rounds in the world of K-pop. In line with this, the fans have been becoming more familiar with the logo of it. Visual Kim Mingyu of k-pop boy group Seventeen has been gracing the apparel of the luxurious apparel numerous times. He would even post his pictures on his Instagram. 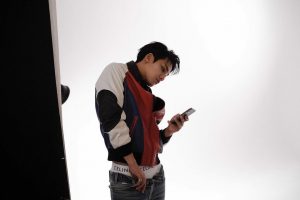 It turns out that the monumental change in the fashion house was courtesy of the new artistic director in 2018, Hedi Slimane. The fashion designer revamped the company by adopting new aesthetics, collaborators, and a global strategy that striked everyone, especially the Korean stars.

Celine’s Fall 2021 Menswear is a collection of medievalist escapism. Slimane wanted to capture the attention of contemporary guys. Inspired by portraits of the court of Francois I, the artistic director went for the high culture as he emphasized French luxury. Broad-shouldered leather gilets and oversized knits took us back to the ‘80s pop culture, but in a medieval way. Studded knit helmet-beanies and nouveau romantic dangly earrings were the accessories included in the collection as well.

“Gucci gang, spend three racks on a new chain.” The Italian luxury brand is so prominent, that someone even made a song about it. American Rapper Gazzy “Lil Pump” Garcia released “Gucci Gang,” which focuses on money and luxury, last October 2017. But does everyone know that it wasn’t always like that for the Gucci family? Guccio Gucci founded the company in 1921, and the first store was located in Florence.  The success of the brand is owed to Aldo Gucci, the son of Guccio. He led the company to become a worldwide-known icon.

Today, it is impossible for a famous personality to not own a Gucci piece. The brand also has numerous prominent ambassadors, and this 2021, they focused on getting Korean stars. Squid Game Star Lee Jung-Jae was recently appointed as a global ambassador last November, joining his co-star HoYeon Jung in the luxury fashion house. According to Gucci, the actor has a charismatic and iconic style, as well as a strong self-identity, which  is similar to the company’s philosophy. Hometown Cha-Cha-Cha female lead character Shin Min-a was selected as well. Another Korean Gucci global ambassador is singer-songwriter Lee Ji-eun, or popularly known as “IU.” She was appointed in 2020, and was partnered with another Korean star from EXO (Kim Jong-in/Kai) for a virtual guided tour at Gucci “No Space, Just A Place. Eterotopia.”

Gucci’s Spring/Summer 2022 ready-to-wear collection was a “love” letter to Old Hollywood. It is no secret that Gucci’s name has long been connected with Hollywood, perhaps why creative director Alessandro Michele made sure that  movies were everywhere you looked at in the fab spring 2022 show. Calico dresses, cowboy hats, sartorial-sporty mix of wide-lapeled jackets, and brightly colored knit leggings were seen in the collection. 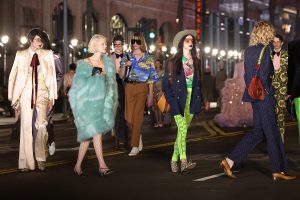 Some of the looks from the Gucci’s Spring/Summer 2022 that stole the show.

Dreams do not work unless you do.  Did you know that Louis Vuitton was only 16 years old when he decided to become a trunk-master? The successful man who we know today started off a humble young boy with a dream. In 1837, that Louis arrived in Paris by foot and began apprenticing for Monsieur Maréch, wherein he quickly became an esteemed craftsman. The lad worked for 17 years before finally opening his very own workshop located  at 4 Rue Neuve-des-Capucines.

Today, it is unthinkable if you are not familiar with their iconic monogram design, especially in their bags. It is indeed a must-have! From wallets to bags, that design is embedded. Similar to other luxury brands, Louis Vuitton gets numerous praises from prestigious personalities. With this said, it is not surprising that celebrities paid tribute to the passing of former creative director Virgil Abloh. Worldwide k-pop sensation BTS (Bangtan Sonyeondan) tweeted, “It was an honor to work with you. A true creative genius.” The septet, consisting of members Jin, Jungkook, Suga, J-Hope, Jimin, V, and RM helped Abloh in the Fall 2021 Louis Vuitton collection, which traversed fantasy ideas of travel. 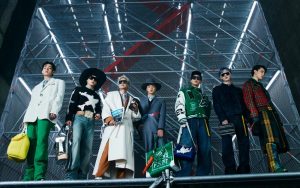 The American fashion designer described the collection as “a conversation between space, movement, and global connectivity.” A black coat, pinstripe shirt, and metal-capped boots were some of the apparels that elevated the collection.

The luxury home of your luxury fashion brands

Where better place to strut your luxurious 2021 Fashion brands than one of the most expensive houses in the Philippines? Portofino Alabang has several properties for sale, including houses and lots. If you want to live in a beautiful and luxurious home, you should head over to Brittany Corporation’s Portofino Alabang.

Located along Daang Hari Road, Las Pinas, Portofino has 300-hectares that houses luxury real estate. Similar to the Italian fashion brands, Portofino manifests the charms of Italy, as well as its culture. Italian architectural details, including cupolas, gabled roofs, and pocket gardens can be spotted in the community.

A home where only the most deserving get to live the most luxurious and grandest, welcome to Portofino Alabang.