Many would agree that Italy is definitely one of the most romantic destinations in the world. Its 3,000-year-old history and culture, combined with its amazing cuisine, music, art, and architecture, provide a truly romantic ambiance which one will have difficulty finding anywhere else in the world, except maybe in the house and lot designs Portofino Alabang. Going around Italy, one will discover warm and cheerful people, charming villages with winding lanes, subdued music, and intimate hotels, and of course, fabulous food offered by the different regions of the country.

Visitors to Italy have plenty of choices of where to go. They can enjoy the sun-soaked Island of Capri, the misty and magical canals of Venice, the soft classical music floating from St. Mark’s Square, the cobblestone streets, and the breathtaking architecture in every city. This undeniably provides design inspirations for houses and lots for sale in the Philippines. Italy definitely has a lot more to offer, and it is just a matter of what visitors would really like to see.

You can find some of the most beautiful houses in the Philippines in Portofino in Daang Hari near Alabang.

The most expensive houses in the Philippines are those whose architecture is well-curated by the real estate developer. Inspired by Italy’s top destinations, Portofino in Vista Alabang provides a themed luxury community in Daang Hari for the investors looking for the best value of luxury. It houses many luxury models in its enclaves Portofino Heights, Portofino South, and Amore at Portofino, whose architecture follows Italian-inspired designs. To know more about this Italian-inspired luxury community, we listed the top inspirations for this real estate development in this article.

With its winding canals, gondolas, and narrow streets, Venice is one of the most romantic and beautiful cities in Italy. The spectacular Piazza San Marco and its other beautiful squares and churches are definitely sights to behold. Visitors can choose from its numerous romantic cafes and restaurants where they can linger after meals and just watch the stream of humanity outside.

Venice is famous not only for its canals and gondolas but also for its Carnevale festivals. It is Italy’s top mardi gras celebration which lasts for several weeks, culminating on the day of Carnival, or Shrove Tuesday. The Carnevale season is a laidback affair even when the city is packed with visitors. A fireworks show in Piazza San Marco marks the end of the Carnevale season.

Lake Como is in Lombardy, part of the Italian Lakes District near Switzerland. One can view the lake and the Alps from the village of Brunat which can be reached by the funicular from the Como town. The lake is ringed by resort villages and beautiful villas. Known as the pearl of the lake, Bellagio is one of the most romantic villages in the area.
Lake Como offers hiking paths, boat trips, and many water activities. It is a good place for photography because of the beautiful sights offered by the mountains and cliffs surrounding the lake. Some of the famous attractions of Lake Como are the following:

1. The walled town of Como offers vibrant squares and nice cafes and has several walking paths. The town also boasts of its silk production. The entire silk-making process can be viewed in the Silk Museum.
2. Villa d’Este, located in the village of Cernobbio, had been converted into a luxury hotel on a wooded peninsula.
3. Menaggio, located against the mountains, is a resort with a lakeside promenade. Outdoor enthusiasts go to Menaggio for hiking or walking, swimming, windsurfing, and rock climbing.
4. Villa del Balbianello in the village of Lenno became famous when it was used as a set for one of the Star Wars movies.
5. Villa Carlota, south of Menaggio, is famous for its gardens. Visitors can see original 18th-century artworks and furniture inside.
6. Campsites around the lake are available, or people can join several cruises that take visitors around the lake. 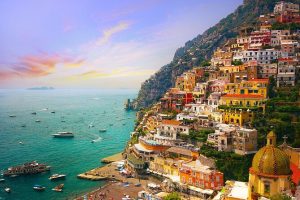 Located on the Amalfi Coast, the picturesque town of Positano is built vertically on the face of the cliff. The town offers romantic restaurants with very good seafood and fantastic views of the sea. The town has a mild climate throughout the year, making it a perennial tourist destination.
Positano started as a fishing village and it became a popular stop for artists and writers in the 1950s. The town still retains its fashionable character. It is a good spot for photography because of its pretty pastel-colored houses and flowers.

Positano visitors will enjoy swimming in the crystal clear waters or simply enjoy the sun on its pebble or sand beaches. They can shop or have a seafood meal along the Spiaggia Grande by the seaside. Strolling along Via Cristoforo Colombo would be another option for visitors. Positano visitors can also see the icon of the Black Madonna inside the Church of Santa Maria Assunta that has a beautiful majolica dome.

The magical island of Capri, a favorite destination since Roman times, is a picturesque and enchanting island made of limestone rock. Adding to the romance of the island is the abundance of flowers that provide scent to the air. The island has secluded coves with romantic and stunning views.

There are many attractions on the island that include romantic spots, such as the Arco Naturale which was used by the Romans as a water shrine, the Augustus Gardens, the remains of Villa Jovis, and the thermal pools and hot springs of the nearby island of Ischia.

A visit to Capri will not be complete without visiting the Blue Grotto, Grotta Azzurra which can be reached by boat from the Marina Grande. The refraction of sunlight into the cave produces an iridescent blue light in the water. One can enter the cave by a small rowboat. Inside the cave, one will have a spectacular view of the blue water. 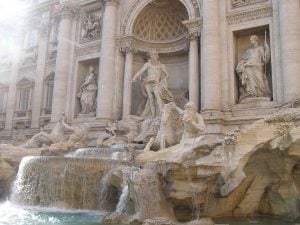 The Trevi Fountain in Rome, Italy is an iconic landmark in Italy. Brittany’s Ultimate Luxury Playlist aims to make its listeners feel right in the middle of the Trevi Fountain.

The city of Rome may not be everyone’s choice for a romantic destination because it is a bustling and busy city. However, Rome, also known as the Eternal City, is considered one of the top destinations in the world. Visitors can marvel at the masterpieces of art, the imposing architecture, and its ancient history that spans more than two and half thousand years. In the ancient world, Rome was the capital of the Roman Kingdom, the Roman Republic, and the Roman Empire. Rome is regarded as the birthplace of western civilization.

Other Places to See

There are numerous other places to see in Italy, such as the Portofino, which inspired house and lot designs in Portofino Alabang, on the Italian Riviera, Verona which is famous for the house and balcony that belonged to Juliet in Shakespeare’s Romeo and Juliet, Taormina in Sicily, Tuscany which boasts of olive groves and vineyards, and numerous other beautiful and romantic places. For those who have yet to visit all these lovely sights in Italy, experience the beauty and romance of this country in your Italian-inspired house and lot for sale in Alabang, for now.

View our virtual tour to step into what Italian luxury living is about in the Philippines. Find out how we do our house and lot designs it in Brittany.