The World’s Most Visited Cities For Travel

Have you ever found yourself pondering on which countries you’ll visit next once the pandemic is over? We don’t really know when we can safely travel again but we should not let that dampen our dreams of having that sweet escapade once again. You’re probably itching to gander again and you’ve asked yourself multiple times “What is the most visited city?” and you thought you’d want to go there. In this article, we listed 7 world-famous cities that attract tourists through their rich history, lush jungles, or even their incredible architecture!

Take note of the tips and recommendations in this article so you can be guided the next time borders have already opened for tourists. We may not know when this will be but it’s better to always be prepared.

What is the most visited city for travel? 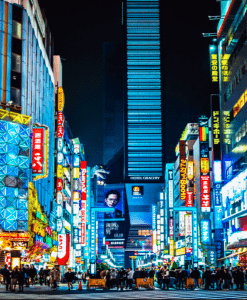 Tokyo, Japan is the place to be for rich culture, sumptuous and authentic Japanese cuisine, and long history.

The first most visited city for travel is Tokyo, Japan. Being the recent host for the 2020 Olympics, Tokyo lures more than a million international visitors yearly because of its rich cultural heritage, street fashion, cultural center, exquisite cuisine, anime, and many more. Tokyo is a popular destination to be if you’re a food junkie and you want to experience authentic, world-class cuisine of Japanese cuisine experience.

For fashion enthusiasts, Harajuku is the haven for you. The Harajuku neighborhood is famously known for its trendy bright and vibrant shops. Birthplace of the kawaii culture, Harajuku is the district for the younger, fashion-conscious generation.

Visit Tokyo’s oldest temple, Sensoji Temple and Nakamise Dori. Gems found in Asakusa, Tokyo, it dates back to 1,300 years of history and is famous for its giant gate called Kaminarimon, with a red lantern dangling below it. 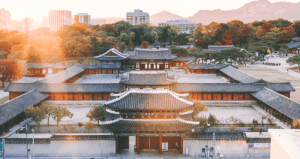 Seoul in South Korea is a must-visit for those who have a longstanding love for both history and modern technology.

The second itinerary on our list, the New York City of Korea, and one of the cities in the world where international visitors go, Seoul is a fast, exciting, and bustling city. Also known as the capital of South Korea, it is filled with a wide range of tourist attractions catering to all age demographics. The capital city is filled with palaces being the financial hub of Korea, five to be specific. The most prominent Gyengbokgung Palace was originally erected in 1395 during the reign of the Joseon dynasty. The palace’s name translates to “Palace Greatly Blessed by Heaven.”

For a unique shopping experience, try Dongdaemun market. More and more tourists are seeing Seoul as one of the cities in the world where they can go shopping. Shopping Malls in this visited city are nice along with street markets. You’ll really feel the city life!

Seoul is rich in traditional architecture as exemplified by the royal palaces in the city. But they are also innovative in modern architecture. History buffs or any art lover would appreciate this city. The Lotte World Tower is a must-see for tourists because it’s relatively new and is currently the fifth tallest building in the world. The skyscraper has indoor and outdoor observation decks with a 360-degree view of the city. The views are wonderful during both day and night! 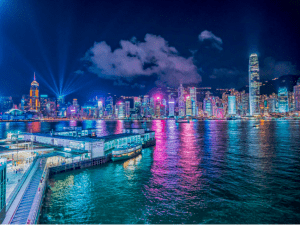 Hong Kong is known not only for Disneyland but also for historic temples and luxury shopping centers.

Traveling south, the third city on our list, one of the best cities to experience the Chinese culture in Hong Kong. A known glamorous city and hub for luxurious shopping. Hong Kong has a wide range of tourist attractions from ancient Buddhist temples to sprawling night markets and abundant nature. Luxury shopping in Hong Kong is no joke. It’s one of the cities in the world where you can buy luxury bags that may even cost as much as a luxury house or luxury condominium!

One of the amazing things you should see is the Hong Kong skyline. Not only is it free but it will for sure take your breath away! You can witness the beauty of skyscraper density from the Kowloon side of the Hong Kong island side. They’re equally mesmerizing.

If you think you’ve seen the whole of Hong Kong through the skyline, you have another thing coming. Appreciate the beauty and the bustling streets of Hong Kong in new heights through Victoria Peak. You should try riding the tram going up to the peak because it’s a unique experience in itself. The Peak showcases not only the busy metropolitan life of Hong Kong but also the richness of green landscapes and nature trails that surrounds the city. 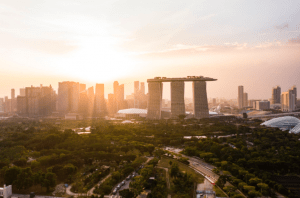 Dubbed as the “Gateway to Asia”, Singapore may be small but this Lion City is one of the major key players in the Economic and Innovation arena worldwide.

Moving further to the south of Asia, next on our list is the most visited cities in Lion City, Singapore. Considered as the “playground for the rich,” Singapore is known for being an economic tiger with diverse cultures and futuristic innovations. If you’ve done prior research before reading this article, then you’d know that Marina Bay Sands resort complex is a definite must-visit attraction. Inside the complex includes a luxury hotel, mall, an Art Science museum, and an observational deck.

The observational deck is located at the ship structure, rested on top of the three buildings. Adjacent to the Marina Bay Sands is the Bay East Garden which is the perfect place for those who want to enjoy a nature-filled escapade in the middle of the city. Make sure to take a photo of you beside Cloud Forest Dome which is the world’s tallest indoor waterfall! Check their website to see ticket prices and operating hours.

London is a tourist favorite for the most visited cities because of its famous attractions.

Taking a trip to the West side of the world, the fifth city on our list of most visited cities is Great Britain’s capital, London. This vibrant capital is considered as having the most world-renowned tourist attractions. How can you forget that this is where Buckingham Palace, the home of British royalty, is erected?

It is truly one of the cornerstones of traveling to the United Kingdom. The Buckingham Palace draws crowds at 11:30 am because of the changing of the guards. Popular tip if you didn’t know yet: to know if the Queen is in the building, the royal standard is flying. If the Union Jack is in its place instead, it means the opposite.

Another major attraction is Big Ben and the Parliament. Big Ben is an iconic landmark and its tolling is known worldwide as the time signal of BBC (British Broadcasting Corporation). The House of Parliament is located just below Big Ben and this structure has been the seat of the British government and was once the location of the Westminster Palace. 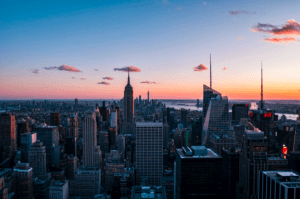 New York City may be faced-paced but you’ll for sure bounce to the beat of its drum.

The Statue of Liberty is among the first spots tourists go to when they reach New York. With its full 152 feet glory, it was gifted by France to America and symbolizes freedom. To really give justice to the beauty of Lady Liberty, you can take a ferry boat going to Liberty Island. You can take picturesque shots at the base of the statue or if you advance reserved a spot, you can go right up to the top of the crown.

You should also visit the MET Museum (Metropolitan Museum of Art) which is considered one of the most famous museums in the United States can be found in New York City. The permanent collections the MET houses accumulate to about 2 million artworks. The MET has three sites but the centerpiece is the Met Fifth Avenue which showcases the highlights of collections such as decorative arts, photography, musical instruments, to name a few. 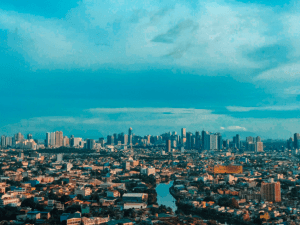 Manila, Philippines may be known as a busy city but don’t let it fool you, it has plenty of tourist attractions to offer.

Last but definitely not the least in our list of the most visited cities is Manila, Philippines. Known as the busy but energetic city in the Pearl of the orient, Manila also has a diverse mix of attractions including historical and religious landmarks, beaches, and modern-day malls. You have to plan your visit in Manila though because typhoons frequent Manila, being that it is located beside the Pacific Ocean.

Intramuros literally translates to “within walls” is a walled fortress built during the Spanish Occupation in Manila. Inside the walled city, you can visit Fort Santiago which is a citadel located inside Intramuros. This citadel was built to protect Intramuros. If you look closely at the structures, you can still see bullet marks on the walls.

Considered as a UNESCO Heritage Site and National Treasure, you should also visit the San Agustin Church.  This church has both Spanish and Chinese influence written on its walls figuratively. It is also worth noting that before entering the church, it already emanates intricacy in design because of the carvings intricately done on the wooden doors of the church. 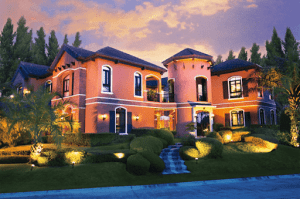 This Italian-inspired mansion at Portofino is beaming with warmth.

As we have gone through the list of the most visited cities, it definitely fueled your will to travel the world again. But we have to patiently wait until everything gets better. For now, all we can do is research and plan for future trips so when the right time comes, we know what to do. From our top 7 list, surely there is something that sparked your interest.

Just like these world-class destinations, Brittany Corporation takes pride in bringing Western scenic destinations to the Philippines. With our American and European-themed luxury house and lots for sale, you can have a taste of traveling during these trying times we’re still nursing the world back to health.

UP NEXT: Tips to Travel the World From the Comfort of Your Home

UP NEXT: How to Achieve the Luxury of First Class Travel at Home