If you look outside the window, you can see high-rise buildings and structures, both basic and sophisticated. These all symbolize wealth, power, and creativity. There are many famous buildings and structures around the world such as the Eiffel Tower in Paris, the Leaning Tower of Pisa in Italy, and the Taj Mahal in India, to name a few.

In this article, we will tackle top structures in the world that are not considered mainstream or as famous as the ones previously mentioned. If you are an architectural enthusiast, you might want to visit these top structures once travel restrictions are lifted. For those who just happen to pass by, take a chance and read this and you might discover a newfound love for architecture.

Must-visit Top Structures And Where To Find Them 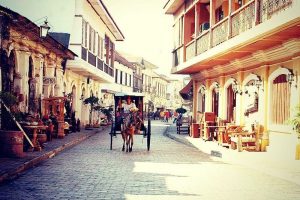 Imagine being transported back in time and experience the preserved Calle Crisologo while riding a kalesa. Photo courtesy: Wikipedia.org

Let us begin the list with the gem that is located in the Northern Luzon area, Ilocos Sur. Calle Crisologo (Crisologo Street) is a feast for your eyes because of its ancestral homes and cobblestone streets that were preserved from the Spanish occupation period. Whether you’re walking down the street or riding the kalesa, you’ll surely appreciate its beauty and history combined.

It was established in the 16th century and was considered the home of the most influential Chinese-Ilocano families during the time. Calle Crisologo, also referred to as “The Heritage Village” is also considered a United Nations Educational, Scientific, and Cultural Organization (UNESCO) Heritage Site. You can take a trip down memory lane in Calle Crisologo to see firsthand the design and architecture during the Spanish influence.

If you visit Calle Crisologo today, you will notice that much of its original architectural, structural elements are still intact. 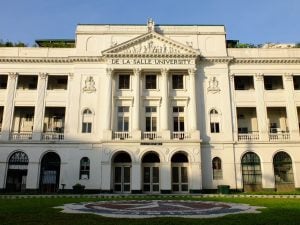 Photographed here is the facade of the St. La Salle Hall, located in the campus of De La Salle University-Manila. Photo courtesy: Wikipedia.org

Traveling south from Vigan,  the next in our top structures list is located in the country’s capital, Manila.  If you are an architectural enthusiast and familiar with the local must-visit sites, you must be familiar with the St. La Salle Hall. It is the only Philippine entry included in the book “1001 Buildings You Must See Before You Die: The World’s Architectural Masterpieces” written by Mark Irving.

The Lasallian education commenced as the brothers established De La Salle College in Paco, Manila. As student occupation grew after a few years, they relocated to Malate, Manila where the campus still stands today. The Lasallian brothers held a design competition for the new building and Tomas Mapúa, the very first registered architect in the Philippines, was hailed the winner. The St. La Salle Hall is a 4-story, H-shaped, neoclassical building.

Tomas Mapúa is also known for being the founder of Mapua Institute of Technology and the architect behind PGH (Philippine General Hospital) both located in Manila.

3. Museum of Contemporary Arts Kiasma in Helsinki, Finland – Top Structures in the World 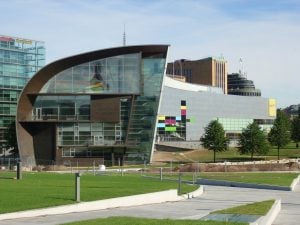 The Museum of Contemporary Arts Kiasma is located in Helsinki, Finland. Not only does it house art, but the actual building itself is also an actual work of art with its intricate, irregular-shaped construction. Photo courtesy: Wikipedia.org

Erected in the heart of Helsinki, the Museum of Contemporary Arts Kiasma is the brainchild of American architect Steven Scholl. The name “Kiasma” is derived from the Greek word for “crossing.” This is because the inspiration for the concept of the museum is the phenomenon of “intertwining and exchange” with regard to connecting the museum as a structure to the city. In the same vein, Scholl also wanted to magnify the idea of the museum being the melting pot for cultural exchanges.

The sophisticated, unconventional shape of the museum is what makes it one of a kind. Although it is closed and is scheduled to reopen in the Spring of 2022, it won’t stop us from appreciating its exterior beauty. 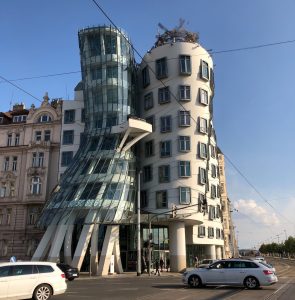 This top structure located in Prague is inspired by the art nouveau movement. As made obvious by its name, the irregularity of its shape is inspired by a pair of dancers. It was designed by architects Vlado Milunić and Frank Gehry. The concept was a nod to 1930s dancers Fred Astair and Ginger Rogers.

The dancing house was completed in 1996. Surrounded by a highly conservative community, it received criticism for its modern, deconstructivist concept. The 9-story structure is supported by 99 pillars with an unconventional structure design. The architects arranged the fenestrations in such a way that it creates an illusion of additional floors and the phantasm of the dancer’s skirt moving along the wind.

Meanwhile, the other part of the building is peaked with a steel-wire formation to mimic the hat of the male dancer. 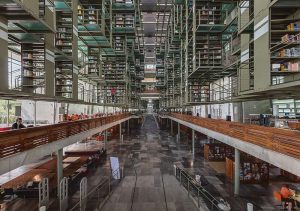 The Vasconcelos Library in Mexico City is also known as the “most contemporary building in Mexico City. Photo courtesy: Wikipedia.org

In the next list of top structures, we visit Mexico City to take a glimpse of the Vasconcelos Library. Designed by Alberto Kalach, this library doesn’t put books on shelves but instead, they are in cages that hang from the ceiling. Alberto Kalach’s vision for the Vasconcelos is that it is a “container”, a vessel that stores human knowledge.

The Vasconcelos is not only a library but it is also a botanical garden. Before construction began, the land area where it was to be erected was barren. From there, Alberto Kalach got the idea of building a botanical garden that will surround the structure.

The Vasconcelos is operating through natural light and ventilation. This top structure has glass windows, translucent floors and is properly ventilated so it does not have air conditioning units inside. It does not get hot in the library because the ventilation is supplemented by a brisé soleil, a technology that can control the amount of sunlight and heat that enters inside a building. 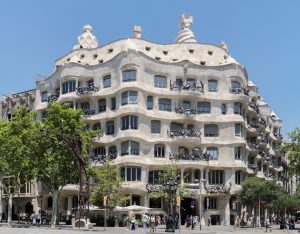 Casa Mila, also famously known as La Pedrera or “the quarry,” is situated in Barcelona, Spain.

From Mexico, we travel to the last in our list of top structures which is the Casa Mila in Barcelona, Spain. This building is truly picturesque and is considered as a modernist product. At first glance, it captures the admiration of tourists because of its facade which creates a wave, an “undulating” illusion. But the Casa Mila has more tricks up its sleeve.

Casa Mila is a two apartment, nine-story building connected by two courtyards and the famous moving facade. The roof deck is also famous for its innovativeness. The sculpture terrace is graced by the ornate chimneys and skylights which are made out of lime-covered bricks, marbles, and other ceramics.

Antoni Gaudi is the man behind the design of Casa Mila. His creation has been part of the UNESCO World Heritage list since 1984. Today, it serves as a multi-purpose venue for cultural events and activities.

Top Structures: Where do Luxury and Architecture meet?

The simple definition of architecture is the art of designing and constructing buildings. So when we talk about luxury, is architecture included? Yes, and as a matter of fact, it plays a crucial role. As we listed the top structures architectural enthusiasts must see, we can tell if something is classic and luxurious based on how it was designed and built.

In other words, architecture is one of the many factors that determines what is luxurious. If you appreciate and understand architecture, you can distinguish the ornate designs and even the intersection of creativity and science.

As we take inspiration from these grand architectural designs, they influence and help fuel our ideas when it comes to designing our own luxury homes.

In Brittany Corporation, we also take pride in the aesthetic value of our properties. Brittany specializes in luxury real estate in the Philippines. Just like the top structures listed above, our properties are meticulously designed by experts in the field, making sure that there is beauty in every detail.

Own a luxury home in Brittany and feel transported to these top structures we listed. Find out more about our properties here.