Best Spots to Catch the Golden Hour in Laguna

We all know that Laguna is known for its magnificent mountains and beautiful lakes. And with its natural wonders like hot springs, cold springs, and waterfalls makes it a perfect suburban residential community of Metro Manila.  What’s even more magical is the golden hour in Laguna.

There is no doubt why many individuals and families stay in Laguna. This place is rich not just with the wonders of nature but with the most beautiful houses in the Philippines. Here, you can find a lot of opportunities for vacation, travel, and tourism. You can even find luxury real estate, mansions in Santa Rosa, and a house and lot near Nuvali if you prefer to.

Laguna is a perfect place to catch the golden hour. Many people would agree – especially photographers – that the golden hour light is the most complimentary natural light worth watching. And if you’re into photography, the golden hour’s soft light gives the skin a velvety appearance, and your subject can face the sun without blinking, bathing them in lovely sunshine.

But where are the perfect spots in Laguna to catch the golden hour? Listed below are the best locations to capture and watch these flattering golden hues.

Where can I enjoy the golden hour in Laguna?

Like the dawn, dusk, and the three twilight stages, the golden hour has no formal meaning because it is a vernacular phrase. Instead, it refers to a natural illumination condition that occurs most frequently around sunrise and sunset.

Golden hour is a brief period just after dawn and just before sunset when the air is saturated with a beautiful golden tint that is ideal for capturing landscapes and portraiture.

Due to needing to be filtered for a long-distance via the atmosphere, the sun is lower in the sky during these hours and hazier (and redder) than usual. As a result, you won’t receive the sharp shadows you see at noon during golden hour.

Enjoy the Golden Hour in Laguna in Mount Makiling 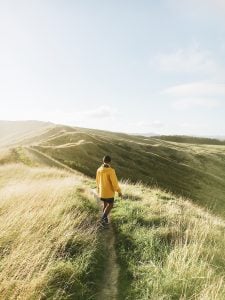 Take a hike in Mount Makiling. | Photo by Janiere Fernandez from Pexels

The province is dominated by Mt. Makiling. The mountain has sparked a plethora of legends involving magical beings and magic. The route to the peak and back is not for the faint of heart; you must work hard to earn your keep. Your endurance and leg muscles will be put to the test on dirt paths, streams, ascents, and descents. It will all be worth it once you reach the peak, though. It is feasible to travel independently. However, there are also joiner trips available from Manila.

Aside from being a great place to hike, Mount Makiling is one of the perfect places in Laguna to spend time with nature, particularly if you want to catch that breathtaking golden hour from the top. This is a perfect place to appreciate the golden hour in Laguna.

Mt. Makiling has been a “mainstay” venue for hikers, scientists, and travelers since it was designated a protected area by the University of the Philippines. The forest, which was rehabilitated in the 1910s, is still in excellent shape, with various birds, reptiles, and another wildlife flourishing. Peak 2’s routes are well-established due to their popularity, and no guide is required to explore the peak.

Suggested Read: These Wellness Spots in Laguna Have Your Back | Brittany Corporation 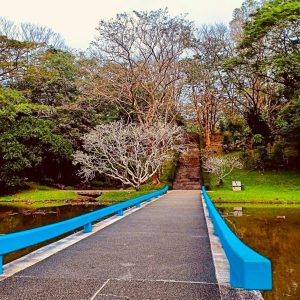 The Japanese Garden is perfect for taking photos!

The Japanese Garden is one of Laguna’s numerous historical attractions. It’s in Cavinti, close to the famous Lake Caliraya. This lovely garden was built in the 1970s to recall World War II Japanese occupation of the Philippines.

A huge torii, or traditional Japanese gate, greets visitors as they approach the premises. These gates are commonly used at shrines or religiously significant locations to alert visitors that they are about to access a sacred zone. After passing through the gate, large expanses of grass and tall trees provide shade for picnickers. In addition, a quiet, man-made pond farther down the path contributes to the garden’s overall peaceful ambiance.

A concrete bridge spans the lagoon and leads to a steep flight of stairs. Finally, you’ll reach another wide section of the garden at the top of these levels, where a splendid altar rests. The shrine was erected by the Philippines-Japan Friendship Society to commemorate Japanese troops who died in World War II. The Yamashita Treasure, claimed war riches seized by Japanese soldiers during WWII, is also said to be buried inside the garden’s grounds.

Visitors may ascend a series of stairs to a hilltop, adding to the garden’s Zen-like charm. You may catch the sun as it comes close to the horizon, where its light appears softer and warmer. Also, enjoy an excellent panoramic view of Caliraya Lake, another popular tourist destination in Laguna, from here.

Caliraya Lake has one of the best golden hour in Laguna

Caliraya lake is a testament to the ingenuity of man. | Photo from Caliraya Resort Club official website

Caliraya Lake, a man-made lake in Lumban, Laguna, is another picturesque destination in the province. Watching the golden hour, golf, jet skiing, windsurfing, fishing, water skiing, and boating are just a few of the leisure and athletic activities available at Caliraya Lake. Hikers will find authorized camping areas.

The lake was constructed in the 1930s by a US Army Engineer dumping water in the Sierra Madre’s Cavinti valley. Its initial aim was to provide a hydroelectric power supply for Manila, the adjacent metropolis.

Caliraya has been a renowned bass fishing site in the Philippines throughout the years. Some visitors from Manila marketed and developed the lake as a leisure destination for the city’s upper crust in the early 1970s.

The lake has undergone various concrete and structural modifications since then, including installing a hydropower plant. Caliraya was then turned into a prosperous town comparable to those seen in western nations. In the 1980s, unfortunately, it became a hideaway and area for the New People’s Army.

In the early 1980s, the local administration looked for a way to revive Caliraya’s thriving tourism industry. As a result, there are now several world-class resorts, golf courses, and country clubs in Caliraya Lake. Enjoy the golden hour in Laguna here!

Catching that warm, golden hour light in Caliraya is one of the most flattering and satisfying moments in life. And since it opens its door to the public, Caliraya Lake has shown a hub for peace beyond doubt. What a perfect place for weary city inhabitants!

Don’t miss the stunning, picture-perfect sunsets and sunrises as the lake reflects the light entirely unique. 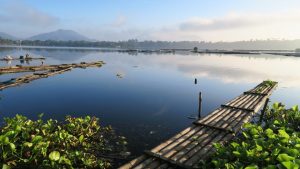 Seven Lakes in Laguna is a beautiful place to be. | Photos from Seven Lakes via Facebook

The origins of the seven lakes may be traced back to ancient legends. One of them discusses the origins of Sampaloc Lake. According to folklore, a couple once possessed a tree yielding a sweet and sour fruit known as Sampaloc or tamarind. They declined to offer fruit to a beggar dressed as a fairy. They were chastised by the fairy, who drowned them in what is now known as Sampaloc Lake.

A one-day driving journey that includes little walking may take you to all seven lakes. You may also focus on a specific area, such as this Mt. Mabilog and Pandin Lake trip.

Bunot Lake, home to farmed Tilapia Nilotica fingerlings, is the first stop on every lake trip. Calibato Lake, the deepest lake in the world, is next, with an average depth of 156 meters. A neighboring waterfall may also be seen.

Visiting the Pandin and Yambo twin lakes is one of the highlights of your tour. The lakes are linked, and both have clean, pure water. You may swim or hire bamboo rafts to float around the lakes.

Lake Palakpakin, the second biggest lake in the Philippines after Sampaloc, is your next stop. After that, Lake Mohicap, which overlooks the Calauan mountain ranges, is also an incredible sight to see. Finally, Sampaloc Lake, the biggest of the crater lakes, is your final stop.

You’ll find this place as one of the best spots in Laguna for photography, especially during the golden hours of the day. Truly an incredible experience for everyone!

There is much more to say about Laguna. Name it, and you’ll have it. But perhaps the best part is that you can find your dream luxury real estate in Brittany Santa Rosa. Live in one of the most beautiful houses in the Philippines in this Old English-inspired community, a place away from the hustle and bustle of city life. 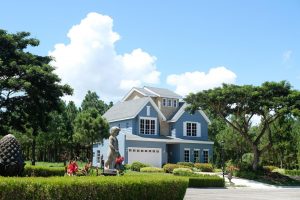 Live in the opulence of Santa Rosa.

Check the luxury homes for sale in Santa Rosa, Laguna, or perhaps a house and lot near Nuvali. You can even find luxury real estate near Nuvali and mansions in Santa Rosa.

There are many reasons why Laguna should be your next home. Brittany Santa Rosa, in particular, has an eco-rich environment. The place is appealing because it offers an environmentally friendly atmosphere that homeowners seek to prioritize their health. In addition, more significant initiatives have accelerated Santa Rosa’s progress, making it a desirable location for purchasers seeking suburban properties with natural surroundings.

Come and visit Brittany Santa Rosa and choose among the most beautiful houses in the Philippines.

Brittany Santa Rosa – a new world of opportunities at the heart of Laguna.

Up Next: The Complete Guide to the Cavite-Laguna Expressway | Brittany Homes

Up Next: Best Diffuser Blends For Your Luxury Home | Brittany Corporation