The Tokyo Olympics is just around the corner, and there have been mixed reactions from both Japanese citizens and spectators from around the world. The World Olympics is a major international multisport event, the last one held in Rio de Janeiro, Brazil in the year 2016. Normally, the following Olympics would come four years later, but then the COVID-19 pandemic struck. This left Japan, and the whole world, paralyzed. 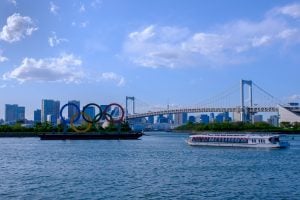 The Tokyo Olympics Pushes Through in July 2021

This year, there has been various news about another postponement, given that the COVID-19 situation in Japan isn’t plateauing yet. However, the most recent and official update from the International Olympic Committee is that the much anticipated Tokyo Olympics 2021 is finally pushing through with its original dates from July 23 to August 8 while the Paralympic Games to be held between August 24 and September 5, without further delays.

With Japan’s State of Emergency still in place, however, the International Olympic Committee has decided to commence this year’s Olympics without a physical audience. The health restrictions mandated by the Japanese government will only allow the entry of foreign athletes with negative COVID-19 results. There is a new wave of the virus in Tokyo, so even local fans will have to stay at home to watch it. 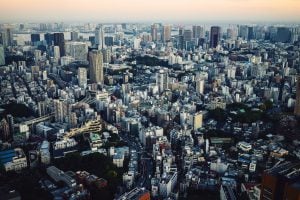 The hustling and bustling Tokyo City

Plans for the 2020 Olympics started as early as 2013 when Tokyo was awarded rights to stage the global event in September. Other cities vying for the slot were Istanbul, Turkey, and Madrid, Spain. This would be the second Tokyo Olympics in history, with the first one held in 1964. Ever since then, both the International Olympic Committee and the Japanese government have been planning for its eventual release.

By January in the year 2019, more than 200 thousand people have registered as volunteers, exceeding the organizing committee’s goal of 80 thousand. In May, the first round of lottery tickets awarded 96 thousand event passes to winners from a pool of 5.1 million applicants—roughly one-seventh of the 35 million people in the metropolitan area of Japan.

The Tokyo Olympics also drew attention for its sustainable efforts, most famous for producing all 5 thousand Olympic medals made from 100 percent recycled metal harvested from 6.2 million disposed or used mobile phones and other IT gadgets collected nationwide. It’s worth noting that chemical substances used in the manufacture of these gadgets are some of the worst environmental hazards.

From plastic bottle recycling to zero-emission fleets, all wheels are in motion to promote Tokyo as a technologically advanced and environmentally conscious city. This is an important message particularly in the face of the global climate crisis that took the year by storm.

Seven years after Japan won the bid for the 2020 Olympics, the Tokyo Olympics is well on its way to being the most technologically advanced Olympics in history, successfully promoting it all throughout the previous year. The acclaimed international event was set to be held in July 2020.

In January 2020, the World Health Organization declared the coronavirus a public health emergency. With expectations that the virus would be contained in a few weeks, the international scene, including the US government, paid this little to no mind. A number of international sporting events, including Olympic qualifying tournaments, were announced either canceled or postponed until further notice in February. At this point, the virus was spreading rapidly worldwide.

In March of 2020, the majority of the world either went on lockdown or started preparing for it. The Philippines, in particular, began its lockdown on March 15, blocking all land, domestic air, and domestic sea travels in and out of Metro Manila, the Philippines’ most populous region with about 12 million people. What was supposedly a one-month lockdown exceeded one year, becoming the world’s longest lockdown in history.

In the same month, the International Olympic Committee finally announced the one-year postponement of the Tokyo Olympics.

The Official Announcement of the 2021 Tokyo Olympics

In January of 2021, the Japanese government made it a point to announce that this year, the Tokyo Olympics would commence without further delay, in hopes that the COVID-19 cases will have significantly decreased by then. This was not well received by Japanese citizens as over 80 percent of the population voted against the 2020 Tokyo Olympics due to health risks, based on a national survey by The Asahi Shimbun news, which is an official partner of the Tokyo Olympics. Some citizens even took to the streets and have begun protesting against the said event.

The traditional Olympic torch relay kicked off in March, beginning the four month countdown to the Tokyo Olympics. However, this normally momentous event went almost unnoticed as celebrations were heavily limited to avoid further backlash from the public. It was also announced that Japan would be banning foreign fans from entering the country in respect of the Japanese government mandated state of emergency. As of today, July 14, there is still no final decision on whether or not local fans would be allowed to spectate, and if refunds will be processed.

In May, the US White House affirmed its support for the Tokyo Olympics by publicly agreeing to send competing US athletes who have been training for years for the event, despite issuing a government advisory banning travel from the US to Japan. This was publicized one week after the Tokyo Medical Practitioners’ Association pleaded with the Japanese government to postpone the Olympics once more, claiming that hospitals are overwhelmed by the continued spike in COVID-19 cases.

The head of a Japanese doctor’s union publicly said that allowing the Tokyo Olympics to push through this year would lead to another spike in COVID-19 cases, as the numbers are still bleak at that point. International Olympic Committee responded by assuring the public that there would be no foreign spectators and that the country’s state of emergency would still be in place so that health protocols will still be followed.

In June, the Group of Seven wealthy nations (G7) backed up Japan’s decision to resume plans for the Tokyo Olympics after a leaders’ summit. The G7 is an informal grouping of seven of the world’s advanced economies: Canada, France, Germany, Italy, Japan, the United Kingdom, the United States, and the European Union.

A month left before the Tokyo Olympics and COVID-19 cases still haven’t even at least plateaued. On June 23, the International Olympic Committee released new event guidelines banning alcohol, high-fives, and talking loudly. They have also banned surrounding establishments from selling alcohol and obliged them to close earlier than usual. At first they reduced the number of Olympic ticket holders that would be allowed into the venues, but now they have banned physical audience altogether.

With the controversial Tokyo Olympics officially pushing through online, it has become a more acceptable event given the current health situation in Japan. Although public support may have waned the past couple of months, it continues to aim for a more competitive and engaging spirit amongst nations even if the public has to watch at home. 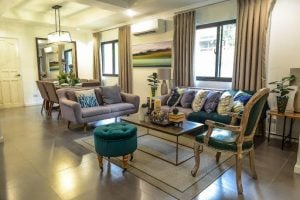 The lavish living room of the Chatelard fully furnished home.

The Tokyo Olympics from the Comforts of Your Luxury Home

With travel restrictions in place, banning foreigners from watching the Tokyo Olympics or even visiting Japan at all, the said event would have to be enjoyed safely at home. After all, celebrating safely may not be possible in usual watch party venues such as sports bars. This may not be as enjoyable as it should have been without a global pandemic, but you might be surprised by the comfort and privacy that your own luxury home living room can offer.

Brittany Corporation provides Filipino families with scenic vacation homes, as well as ready-for-occupancy luxury houses and lots in key locations. With five exclusive themed master-planned developments, each home is perfectly convenient for a month-long celebration or a lifetime stay. In exclusive luxury properties such as Crosswinds in Tagaytay, Promenade in Sta. Rosa Laguna, and Portofino in Vista Alabang, the Tokyo Olympics can indeed be just as exciting indoors with family and loved ones.

UP NEXT: What to Expect This Summer Paralympics 2021

UP NEXT: The First Filipino and Southeast Asian Olympic Medalist