Two weeks ago, actor and model Anya Taylor-Joy was announced to be the new Dior ambassador. This came as no surprise and a huge delight to her fans, avid viewers, and film enthusiasts who had been following her these recent years. Taylor-Joy can make any film role fashionable, and people who are into high fashion would know that Dior is the actor’s go-to brand for her red carpet moments. This is why Anya Taylor-Joy is a great choice as a Dior ambassador for both the house’s fashion and make-up lines. 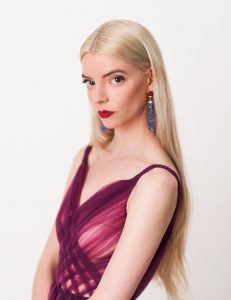 How She Took Us By Storm

One may have known her through the hit 2020 Netflix miniseries The Queen’s Gambit, or perhaps in her earlier film roles. Whichever the case, the viewer would be able to say that Anya Taylor-Joy is a success on the screen and has major potential. Not everyone can be as versatile as her, nailing roles from Emma Woodhouse in Emma to Beth Harmon in The Queen’s Gambit. Yes, she rocked these two different roles and she made it look easy.

She is such a natural talent that she bagged numerous awards for different film roles. She debuted in the 2015 horror film The Witch, where she played the lead role of Thomasin. She won two awards for this, a Gotham Award and an Empire award. Her success did not end there. She starred in more films and TV series, like The Miniaturist (2017) and The Dark Crystal: Age of Resistance (2019), in the following years and she received accolades, nominations, and awards from various award-giving bodies. It would take a luxury mansion house to do justice, like a home, to trophies, plaques, and perhaps other mementos she bagged for her successful work. 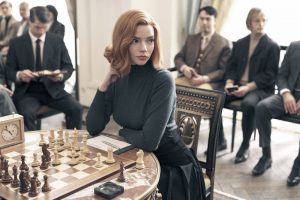 Anya Taylor-Joy as Beth Harmon in The Queen’s Gambit. | Photo by Charlie Gray via Netflix

Recent news also revealed that she will be voicing Princess Peach in the 2022 Mario film. Another lead role, and now in a Nintendo film! One should also watch out for the 2024 film Furiosa. Guess which role she will be playing then — Imperator Furiosa. This is a much stronger role from her previous ones, so viewers are excited to see her take.

She is like the Rachel McAdams, who starred as Regina George in Mean Girls (2004), of the films she graces, in a sense that nobody can play these roles better than she does. Remember the craze with chess after The Queen’s Gambit became popular? Ten days after the series was released, eBay searches for chess sets went up by 273 per cent. This is called the Netflix effect, and manufacturers can thank Anya Taylor-Joy for giving an amazing performance, as she made chess look fashionable. She did not even use fancy glass chess boards and pieces, like in luxury house Philippines. Imagine playing the board game on an intricately designed and jeweled chess set in one of the most beautiful houses in the Philippines! Luxury real estate can transform a simple experience into a grand one. Make sure to check out Brittany Corporation for properties for sale and luxury house and lot for sale. Watch the best films and play your favorite games in a beautiful home. 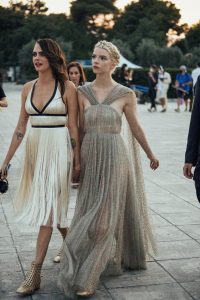 She reminds the people of a blonde and regal Cara Delevigne, because of her strong appeal and the way she carries herself. It is delightful to know that the new Dior ambassador is close friends with the English model, actor, and singer Cara Delevigne. There is something about two influential women supporting each other and expressing their friendship on Instagram that is very heartwarming. Gone are the days when women tear each other down. The fashion world was proud when Cara Delevigne posted an Instagram video of her and the new Dior ambassador at a fashion show in June this year. The latter was seen helping Delevigne untangle her dress when she experienced a wardrobe malfunction. They were even sporting matching shoes from the brand’s Spring-Summer 2021 couture collection.

Anya Taylor-Joy on the Red Carpet

Now take a look at the new Dior ambassador’s red carpet moments with her brand, looking every inch the movie star — elegant, intelligent, and timeless at the same time. 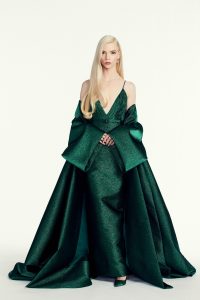 Anya Taylor-Joy in her Golden Globes gown. | Photo by Sami Drasin via Vogue

This was Taylor-Joy’s ensemble when she received her Best Actress Golden Globe for her role in The Queen’s Gambit as Beth Harmon. The goal with the floor-length cape and the draped bust was to give a ‘70s bombshell vibe, and this she delivered. She looked ever so sharp and glamorous in the color green, which she said had a significance not only to her, but also to the characters Beth Harmon and Emma Woodhouse, from the film Emma. She conceptualized the dress with her stylist Law Roach and Dior creative director Maria Grazia Chiuri, and together, they made green look like it is the new red. She wore shoes and makeup, both from Dior, and jewelry from Tiffany & Co., valued to be at more than one million dollars — crazy expensive, like luxury house Philippines. She did all the pieces justice and so much more. She is also an ambassador for Tiffany & Co. 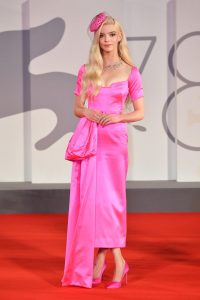 She was 25 in this picture, but she looked so much younger in Barbie pink. This is her look at the Venice Film Festival, in another Dior haute couture dress. She was wearing a mid-length frock, with a woven beret and stilettos to match. Tiffany & Co. was also in the picture, and you can see them through her diamond leaf necklace. 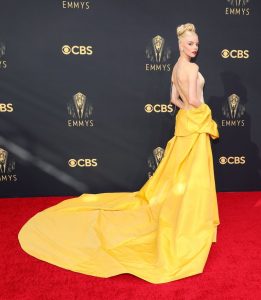 Anya Taylor-Joy at the Emmys in another Christian Dior jewel. | Photo by Rich Fury via Getty Images

This is a great addition to Taylor-Joy’s collection of Dior dresses for 2021. She went to the Emmys, because she and The Queen’s Gambit both received nominations, and she showed up as a winner, in a backless white dress and a floor-length canary yellow shawl. She was again accessorized by Tiffany & Co. The red Dior lipstick is considered her signature look, as she often appears at award-giving ceremonies with a bright red pout. Taylor Swift tried to make red lips her look, but Anya Taylor-Joy is giving her a run for her money.

Taylor-Joy said that the three things she needed to live are food, water, and art, and we can really say that she is a work of art in awarding events like the Emmys, thanks to Christian Dior, Tiffany & Co., and Taylor-Joy’s talent in modeling. She just knows how to give an artistic show. These dresses take many people, expensive materials, and a lot of hours to make, so it would be a shame if they are not given a proper home after their respective events. Investing in luxury real estate, your most prized outfits and works of art like Anya Taylor-Joy’s dresses are sure to have a worthy space, so check out Brittany Corporation for properties for sale and luxury house and lot for sale.

Viewers just love a strong and charming woman like Anya Taylor-Joy, but there is more to her than just her looks and fashion sense. In an interview with Elle, she was asked about three things she wanted to be remembered for, and she answered that she wanted to be remembered for her kindness, being hardworking, and being fun. She hoped that coworkers had fun working with her, and she definitely gave fun vibes in her interviews, taking questions seriously while maintaining her humor. She speaks eloquently and clearly in her deep voice and beautiful accent that listening to her is already a pleasure.

She also opens up personal information and experiences that make her relatable, like when she dropped out of school when she was sixteen, because of bullies. It is hard to imagine an endearing and spirited girl like Taylor-Joy getting locked in lockers and crying in bathroom stalls, but she did. She got scouted as a model by Sarah Doukas, founder of Storm Management, while she was walking by a Harrods department store in London when she was seventeen, so life did turn around for her.

When she was six, her family moved from Buenos Aires to London, and she said that this was traumatic for her, because she missed Argentina, and moving to London was a huge shift in culture. She recalled the green pastures and animals in Argentina, and perhaps this is why she loves animals, as she said in the Elle interview. Old animated series with animals in it make her feel nostalgic and when asked which animal she would be, she said she would like to say a killer whale, but that she is more like a cat and a hummingbird in one. She definitely gives orca vibes, so her saying the latter would make her fans think more about her personality off-screen.

She also said that in the past year, what she learned about herself is that sometimes, she enjoys being alone. The pandemic made people change a lot about their habits, and one of the things people got used to is the need for self-isolation. Now, this is something that is more fun done in a luxury mansion house. Living in one of the most beautiful houses in the Philippines is sure to make social distancing a lot easier and much more worthwhile. Brittany Corporation can offer just that — properties for sale and luxury house and lot for sale. Spend time alone and watch old TV series in style like Anya Taylor-Joy in a luxury house Philippines. Investing in luxury real estate will always be worth it.

She was also asked to share some things about her that her fans did not know, and she said that she can speak Spanish fluently and that she can sing. She even shared that she would love to be in a musical. Now, this is something that can get avid viewers excited, because the world has already seen her do roles like Emma and Beth. She also has already done horror. In 2024, she will be seen playing a stronger character — Imperator Furiosa in the film Furiosa. A musical will be a change from her usual roles and is something that will prove her versatility. Given her tenacity, there is little doubt that she can pull it off. Watch all her films in the comfort of your luxury mansion house, whether on a giant flat-screen or a home cinema. These are definitely great ideas for luxury house Philippine, and Brittany Corporation can offer you the most beautiful houses in the Philippines.

Anya Taylor-Joy recently became a darling of the media for lots of reasons, including her success in acting, obvious talent in modeling, and her personality. Fans and viewers alike can expect much more in the coming years from the actor and model, who said that she can also sing. With films to be released in the next few years and with her being Dior’s new ambassador, great things will surely come.

Classic gowns, expensive jewelry, and red lips — she never disappoints on the red carpet, stealing the show with her strong gaze and pout. As viewers expect more diverse films from her, perhaps her fashion sense will also become more adventurous, so fans can see more sides to one of the most influential personalities during this time.

UP NEXT: Festive pieces to wear this Holiday Season | Brittany Corporation