Mother’s Day: The Language of Flowers

Ever since the dawn of human civilization, people all over the world have acknowledged the power and responsibility of motherhood. Ancient civilizations, like the Egyptians, Greek, and Romans, are known to have established national festivals for their “mother goddesses,” whom they honored through lavish celebrations and unique offerings that used the language of flowers.

Throughout history, celebrations honoring motherhood have continuously morphed and evolved.

In Europe, an ancient festival celebrated since the Middle Ages called Mothering Sunday is the clearest predecessor of our modern-day Mother’s Day. 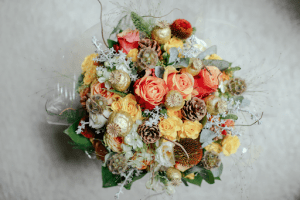 A beautiful arrangement consisting of orange, yellow, and red flowers

In the United States, various efforts to celebrate the nurturing and unifying force of motherhood have been made by notable figures such as Julia Ward Howe, Ann Reeves Jarvis, Juliet Calhoun Blakely, and the duo of Mary Towles Sasseen and Frank Hering.

Today, Mother’s Day bears little resemblance to its many-faced predecessors. It’s now more secular, for one, and celebrated widely across the globe across people of different nationalities and religions. It has also developed its traditions, such as the expression of love and giving of gifts.

One of the most widely-practiced traditions of the Mother’s Day celebration, however, is the giving of flowers. 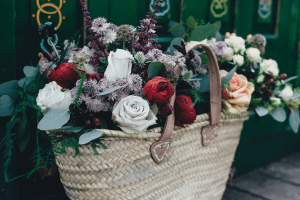 A basket filled with different flower varieties, including differently-colored roses

There are several reasons why the giving of flowers is so popular during Mother’s Day.

On the practical side, flowers make for fantastic gifts. It’s something out of the ordinary, a true luxury in the subtlest sense. Giving flowers to someone means that they’re important enough to make an effort for. At the same time, flowers are wildly popular, easy to acquire, and you can always choose an infinite combination of them to make something unique for those you love.

But did you also know that the giving of flowers on Mother’s Day also has a rich history behind it? It started with the previously-mentioned Mothering Sunday. After people attended mass in their own town’s “mother church,” they went home to their respective mothers and gave them gifts, which commonly included cakes and violets.

As we can see, flowers during Mother’s Day both have a practical and historical meaning. But there’s one other aspect of flowers — an innate symbolism and even a language — that has permanently established this beautiful, elegant object as one of the most valued gifts throughout history.

The Language of Flowers: What Flowers Say During Mother’s Day

The popularity of the language of flowers is often attributed to the Victorian era.

Back then, there were strict social norms and codes of conduct that greatly limited personal expression. These rules were so prevalent that people were compelled to turn to a more subtle, and even ancient, form of conveying meanings—the historically practiced language of floriography. It’s probably not surprising to say that people have been attributing meanings to flowers since ancient times.

Today, flowers are such well-accepted gifts that they don’t really require a deeper meaning, but wouldn’t you want to express what your beloved mother truly means to you through a language as fragrant and sweet as that of flowers? After all, Mother’s Day is a special day meant to celebrate motherhood.

To help you do this, we’ve listed the most common meanings of flowers below. 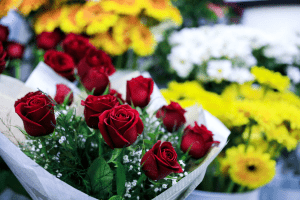 A bouquet of red roses

There probably isn’t any flower with a more universally accepted meaning than the rose.

Historically acknowledged to be a symbol of motherhood, ancient Egyptians considered the rose to be a symbol of the moon goddess and protector of women and children, Isis. Meanwhile, Greeks attributed it to Aphrodite, the goddess of love, fertility, and occasionally, marriage. Later on, the European Middle Ages saw the rose being re-framed to be the Virgin Mary’s symbolic flower, once again linking back to motherhood, and exhibiting the language of flowers.

Today, roses are popularized by literature and the media as a flower that means romance, with the distinctive, elegant, deep red petals of this flower thought to convey romance and passion.

However, roses don’t just come in red — and it doesn’t just mean romantic love, either. Pink roses, for instance, can convey gratitude, recognition, and appreciation. Yellow roses used to mean jealousy and bitterness, but are now widely accepted as a symbol of friendship and loyalty. White roses denote brightness, purity, and kindness.

An iconic 16th-century poet and playwright, William Shakespeare, famously wrote: “A rose by any other name would smell as sweet.” In the famous tragedy Romeo & Juliet, this line was used to showcase Juliet Capulet’s love for Romeo Montague, her lover who belonged to her family’s rival clan. With this line, she conveyed that regardless of his name, she would love him all the same.

Taken literally, this means that no matter what you call a rose, it would not detract from the flower’s perfection. It’s the same with mothers. Mothers today, for instance, wear a lot of different hats. They’re career women, wives, business leaders, adventurers, or homemakers. Yet, no matter what they’re called, and no matter how they present themselves to the outside world, they will always be our mothers: carers, nurturers, protectors, and providers. A bouquet of roses on Mother’s Day will help you convey this meaning in its many different forms. 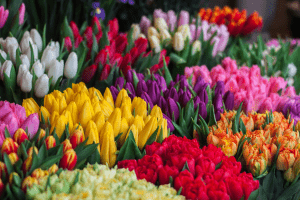 Although tulips evoke images of vast tulip fields in the Netherlands, these elegant flowers were first cultivated in Turkey and Persia. The name even comes from a Latinized version of a Persian word for ‘turban.’ Quite fitting since they do look the part.

In the 1600s, the novelty and exotic allure of tulips exploded in what is forever entombed in the annals of economics as the Dutch Tulip Bulb Market Bubble, or more popularly “tulipmania.” During the early 1600s, prices of tulips rose to such an inconceivable extent, six times higher than the average annual salary at the time.

This just goes to show that tulips have an interesting and varied history, and for a good reason. More than livening the backyard of any lot for sale, these flowers exude elegance and grace and can brighten the room of luxury homes just by being displayed in a simple vase.

These pretty bulbs also herald the coming of spring, a symbol of new life. Thus, they’re appropriate presents for new or expecting mothers to express the warmth and affection towards the new blessings that they will soon be welcoming in their lives. 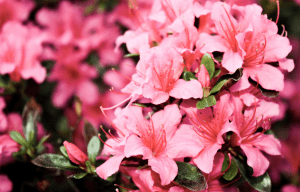 This airy-looking flowering shrub is a hardy plant that can adorn any luxury house and lot. Although readily available and can be picked up at your local florist without a problem, they can be used to convey complex emotions and meanings.

More than raising the value of any luxury home for sale, Azaleas in the Victorian era were sent to convey temperance and restraint, and are appropriate to describe a calm and controlled mother in the modern sense.

It’s widely celebrated as a flower of femininity, womanhood, and love by various cultures worldwide. It also symbolizes gentleness and eternal beauty, making it a perfect gift to every caring and loving mother.

Some East Asian cultures also consider azaleas as reminders of the nostalgic times spent in childhood homes. In these cultures, these beautiful flowers are used to remind adults of the innocent and fun times when they were still children living under their parents’ wing. 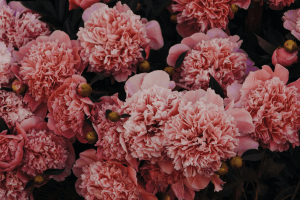 Pink carnations growing in the wild

Harking back to Anna Marie Jarvis and her quest for a day in the calendar to honor mothers—which began with giving away 500 white carnations to her local church during her mother’s memorial—one can see why carnations are a classical Mother’s Day flower.

The frilly petals and subtle fragrance, the simple leaves, and the dainty stalk all together exude a sense of subtle beauty and grace. Pretty enough to decorate any prized ornament of luxury houses’ rooms, carnations also hold different meanings.

White carnations, for example, are said to bring good luck. Pink carnations symbolize a mother’s love, while light-red carnations symbolize admiration. More colors and varieties of carnations have been taken to symbolize purity, charity, love, and even beauty, all reflecting values of motherhood. These are some examples of how the language of flowers is exhibited. 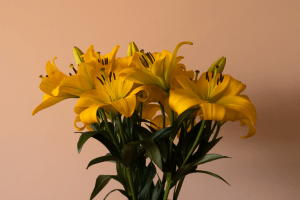 A beautiful bunch of yellow lilies

According to Greek mythology, lilies came from the milk of Hera, Zeus’s wife and goddess of women and marriage. Since it symbolized purity, ancient Greek brides used to wear flower crowns adorned with lilies.

Nowadays, while lilies are still loved all over the world for their simplicity and elegance, they’re much more revered in Asian culture as a symbol of motherhood. This makes them a perfect flower of choice for Mother’s Day.

Also, although lilies also have different color varieties, it’s unique that all lilies are thought to mean devotion and purity, two values that are also traditionally associated with motherhood. However, there are noteworthy nuances in their meanings between varieties. 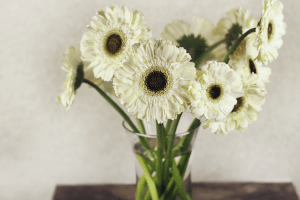 White gerbera daisies placed inside a vase filled with water

The very image of a gerbera daisy can evoke happiness and good cheer. The ancient Egyptian word ‘gerberas’ means devotion to the sun and closeness to nature. This can be taken to symbolize a person’s happiness and inner peace.

More than livening up any room of luxury homes, gerbera daisies are ideal gifts for wishing a mother the happiness of a simple life. It denotes contentment, happiness, and gratefulness and has historically been taken to mean the celebration of life, brought about by the brightness of their colors and the good cheer that these flowers evoke. 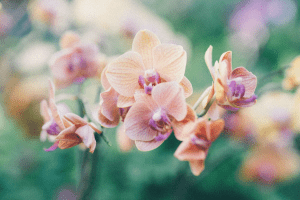 Finally, another popular choice for Mother’s Day flowers is the orchid. Commonly found in tropical areas such as parts of China and the Philippines, this flower has spread all over the world. Some species of orchids thrive practically anywhere, such as between crags of rocks, in branches of trees, and even on the ground.

Orchids are hardy little flowers that exude elegance and sophistication. They come in a wide variety of colors, shapes, and sizes. They’re also ideal Mother’s Day flowers for many different reasons.

On the practical side, they’re excellent decorative flowers. Mothers with a green thumb will undoubtedly enjoy a gift of orchids as they can stay in bloom for several weeks, given the proper care. And unlike roses and other flower cuttings, orchids can be displayed in their entirety, glossy leaves and all.

They’re also very easy to care for. Since they’re used to thriving in various places, they can be placed almost anywhere: in a vase, on a flower bed, or as a decoration to your plain white walls. Their appearance exudes beauty and elegance, perfect for decorating luxury homes. They’re also not as mainstream as typical Mother’s Day flowers such as roses.

With its wide variety and deep meaning, you can find any kind of orchid to suit your mother’s unique personality this coming Mother’s Day.

What Flowers Say During Mother’s Day

Mother’s Day is not just any old holiday. Ancient civilizations have long regarded motherhood as a high honor. Those sentiments remain true today, even though they may have already lost most of their religious and archaic meanings.

Today, Mother’s Day exists to recognize, commemorate, and celebrate the enormous influence our mothers have in our lives. Their unwavering support, constant presence, and strong love for their children are as timeless and eternal as the beauty of flowers.

Make sure to give them the highest honor on their special day by speaking to them in the language of beauty, elegance, and grace. This Mother’s Day, speak your heart with the language of flowers.