How Much Drinking Water You Need Based On Your Lifestyle

Everybody knows that you need eight 8-ounce glasses of drinking water a day to be healthy. It seems to be a good rule to abide by–simple, easy to remember, and good for the body.

But is it really that simple? Are we expected to believe that drinking 8 glasses of water a day is all we have to do to stay hydrated?

If you think about it, it feels too simple, like something you tell kids who misbehave. After all, everyone’s bodies are different. What if people need more drinking water than others?

Here in Brittany, we care about your lifestyle. We want you to live a healthy, beautiful life in your luxury house and lot in the Philippines. Thus, we’re going to dive deep into how much water you need based on your lifestyle.

Is the 8×8 rule of drinking water real or just a myth?

If you’ve never heard of it before, the 8-hour rule says that you must drink 8 glasses of water a day, each glass containing about 8-ounce of water. This makes a total of about half a gallon or about 2 liters.

Where exactly did this rule come from? In the next section, we’ll examine where it originated and whether the 8×8 rule is really something that we should live by. 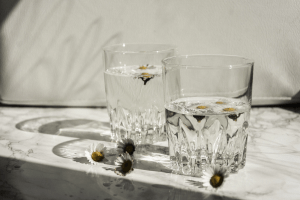 Where the 8×8 rule started

One of the earliest mentions of the 8×8 rule can be attributed to one Vincent Priessnitz, who founded a practice and institution in Austria called “Hydropathy,” also called the Cold Water Cure, in 1829. His method promoted drinking excessive amounts of water, along with cascading waterfalls and various forms of baths. This trend swept through the United States and Europe at the time.

A hundred years later, the 1945 Food and Nutrition Board of the United States Echoed the same principles in releasing guidelines that stated a minimum of 2.5L of water daily is the ideal amount of consumption.

The 8-glasses a day theory can also be traced back to one Dr. Irwin Stillman, who published a diet method called The Stillman Diet in 1967. This diet method specified that dieters should drink at least 8 glasses containing 10 ounces of water a day. He claimed that this helped remove the fatty acids in the body.

In 1974, a doctor called Dr. Frederick Stare co-authored another bestseller that also recommended drinking 6-8 glasses of water every day.

This craze was repeated in 1992, when a popular book called Your Body’s Many Cries for Water, written by MD Fereydoon Batmanghelidj, called for the consumption of 10 glasses of water in a day. The author claimed that the lack of water is the primary source of bodily pains such as diabetes, asthma, hypertension, and much more.

Many people also attributed the craze to the bottled-water industry, which boomed in the 1980s and continued to rake in billions even until now.

And so we can see that the concept of the 8×8 rule has enjoyed a popular history, spanning at least 200 years. But does it hold much ground at all, or is it just another popular but unfounded health craze?

What studies say about drinking water with the 8×8 rule 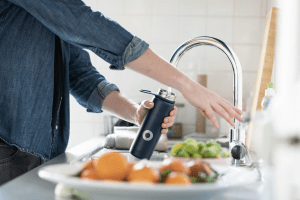 We all need water to survive – this is an undeniable fact.

Brittany wants you to have the best lifestyle possible – and if something as mundane as drinking water elevates your health, then we want to do our best to contribute to that. We want you to be able to enjoy your luxury home for decades to come.

Seeing as this belief got popular to the point that it’s now “common knowledge,” it’s only fitting for us to evaluate if it’s actually backed by science.

One of the earliest scientifically valid criticisms of this belief comes from a 2002 study done by Heinz Valtin.

In the study, he criticized the claims that one should drink the standard 8×8 (8 glasses of 8 ounces of water) amount of water daily. He concluded that “rigorous proof of that counsel appears to be lacking.”

From the analysis made from hundreds of peer-reviewed journals, both electronic and otherwise, there’s no evidence that an authoritative body ever said that 8×8 glasses of pure water every day is necessary for a healthier life.

In addition to this, Valtin mentioned that water intake from other sources, such as caffeinated drinks, hot beverages, and even fruits and vegetables, also contributes to the water balance in the body – not just plain drinking water alone.

Valtin concluded that the recommendation is vague in the first place. It’s not specific about what kind of water should be drunk 8 times a day, such as bottled, tap, or even soup dishes. The environment is also not accounted for (temperate or tropical), nor is the physical makeup (healthy, unhealthy, or anywhere in between) and lifestyle (active or passive) of the individual discussed.

The 1945 Food and Nutrition Board

One can find the main arguments of this idea in the 1945 Food and Nutrition Board discussed earlier, which advocated for consuming 2.5 Liters of water every day.

However, the section also contained a sentence that said the quantity of that water could come from most prepared food. You don’t have to drink 2.5L of pure water, but any combination of fluids is OK, as long as you maintain an overall 2.5L water level in the body. The actual publication reads:

“A suitable allowance of water for adults is 2.5 liters daily in most instances. An ordinary standard for diverse persons is 1 milliliter for each calorie of food. Most of this quantity is contained in prepared foods.” 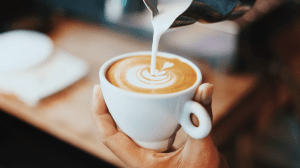 You don’t have to get all the water you need from drinking water alone.

Joshua Dewald is the owner of a blog called Skepticink.com that evaluated popular beliefs by matching their claims with existing scientific studies.

He concluded that the standard recommendation of 8×8 glasses of drinking water a day is inaccurate. In the first place, the Institute of Medicine published that normal female adults should have a water intake of about 2.7L and normal adult males should have about 3.7L of water.

But the publication also said that more or less 20% would come from food, and it never said anything about drinking only pure water.

So this comes down to a recommended water intake of 2.16L for women and 2.96L for men – some of which can come from other beverages that contain liquids, not just pure water. In reality, pure water intake can be kept even lower.

Factors that determine how much water you should drink

Now that we know the 8×8 rule is not entirely accurate, how much water should we actually drink?

This depends on quite a few things: our activity level, weight, diet, health, environment, and condition. In this section, we will examine exactly how they all affect the amount of water we should drink. 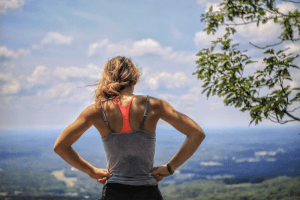 The more active you are, the more water you need.

This is one of the most significant determinants of the amount of water that we should drink. The more you move, the more water you lose. Not just because we sweat – although that’s also one factor. Actually, the cells in our muscles also expend minerals in our blood to perform the work we demand of them.

This is why we get thirsty after some time when exercising or doing something strenuous. And the best way to replenish lost fluids and minerals burned up during the activity is through drinking water.

So, in other words, the more active you are, the more water you will need. If you live a sedentary lifestyle, then you wouldn’t lose as much water and minerals, which means you don’t need as much water as someone with an active lifestyle.

The amount of water you should drink also depends on your weight. This is because most of our body mass is made up of water (averaging 44% to 75%), depending on the body structure. Thus, the more you weigh, the more you are composed of water. And to maintain a healthy water level in your system, you need to drink more water in turn.

The kind of food and beverages you usually drink affects how much drinking water you need. For example, if you frequently drink caffeinated drinks, such as coffee or soda, you probably urinate a lot and thus need to replenish your body’s water levels more often.

The same principle applies if you have a salty, spicy, or sugary diet. If you don’t eat a lot of food containing water, such as vegetables and fruit, you should also compensate for this by drinking a lot of water.

Any illness that includes vomiting, diarrhea, or fever will cause you to lose water and electrolytes. This is true for UTI, urinary tract stones, heart conditions, and diabetes, among many others. If you have a health condition that frequently results in loss of fluids, then you should compensate by drinking more water to replenish it. 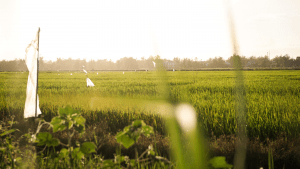 People who live in hot and humid places, like the Philippines, need to drink a lot of water.

You will need to drink a lot more water in environments where you lose more water. As an archipelago positioned below the equator, the Philippines is a great example. If you’re planning to buy luxury homes for sale in the Philippines, keep in mind that the hot and humid weather will make you sweat more, so replenishment is necessary.

In temperate climates, you will most likely need more water in the warmer months of the year compared to the colder months. The same principle applies to your immediate environment, such as being in a hotter room compared to a cooler one.

The other bodily conditions, such as breastfeeding or pregnancy, can cause a healthy person to lose more fluid. Thus, they would also need to be more cautious about maintaining their water levels and drink plenty of water.

A Healthier Life is a Beautiful Life

In the end, we can’t give you the exact amount of water that you need to drink every day. There are just too many factors that vary from person to person to provide a blanket statement such as “drink 8 glasses of water a day.”

We’ve provided clear and scientific evidence that the 8×8 rule is not the best standard to tell us how much water we can drink. As an alternative, the factors that affect the amount of water we should drink daily were also discussed.

Here at Brittany, your health is of utmost importance to us. Brittany is a premier development in the Philippines known for luxury houses and lots amidst exclusive enclaves. In Brittany, we strive for everything to be beautiful, from our communities, to our homes, and even to the lives of our residents. This is why health is important to us.

After all, how can you enjoy a glamorous lifestyle in one of our luxury homes if you’re not as healthy as you can be? Health is wealth, so they say, and we should all do our best to be wealthy in that regard.