The Philippines is highly diverse in terms of cuisine appreciation, particularly when it comes to specialties. It is customary for Filipinos to acquire their popular products whenever they visit a particular location. It appears that many sweet delicacies have served as a source of pride throughout the Philippines, one of which is the Laguna Province.

Apart from its hot spring resorts, magnificent festivals, tourist destinations, and cultural treasures, Laguna delicacies and gourmet starters are also popular. Indeed, each community in Laguna has its own particular, delectable product.

The escape to Laguna countryside

There are a variety of reasons why people choose to escape to the Laguna countryside. Families take advantage of the hot springs resorts to unwind. Students go on field trips to Jose Rizal’s birthplace to learn about his life and legacy. Those that visit Laguna are drawn to the city by modern attractions such as the Enchanted Kingdom, outlet shopping, and the province’s expanding food sector.

However, the wonderful Laguna delicacies available for purchase at roadside vendors and gift shops distinguish Laguna as a road trip favorite. As if you needed another reminder that you were in Laguna, the sight of buko pie (young coconut pie) stands competing for your attention is a powerful one. Nonetheless, many of the province’s gastronomic discoveries remain classics of Filipino cuisine. Moreover, what is delectable to bring back home after a long day of eating, tripping, touring, and bathing is unknown. Here’s a list of the tastiest and most famous culinary spots in Laguna, as well as information on where to find them. 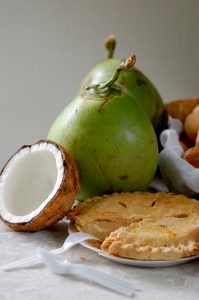 The combination of intrigue and delectable appeals to many people. True to form, it’s similar to an apple pie.

However, instead of an apple, a young coconut is utilized to create the pie filling. The pie has a crispy “buko meat” on the top and a soft buko filling on the inside. When you bite into it, you’ll feel all the beautiful feelings wash over you, and you’ll forget about everything else in the world. The best ones are sold in Los Baños, so if you happen to be in the area, you are obligated to purchase one or risk missing a lot. 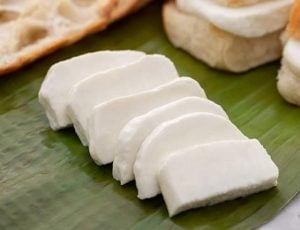 Kesong puti is a Filipino cheese produced with soft and unaged carabao milk and salt that has been curdled with vinegar, citrus juices, or rennet juices to create a creamy texture.

Kesong Puti can also be made with goat or cow’s milk, depending on your preference. Kesong puti is a traditional dish that originated in Sta. Cruz, Laguna.

Kesong puti can be served with a variety of various types of bread, depending on your preferences. However, the hot pandesal dish is traditionally served with Kesong Puti in Laguna. Its smoothness and shape will make you think of tofu when you hear the word “salted.”

You can get a taste of it with Gil’s Kesong Puti located in Bagumbayan, Sta. Cruz, Laguna 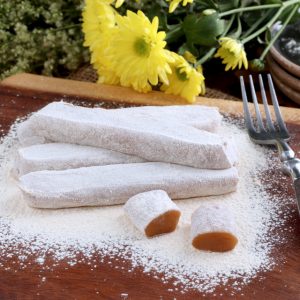 Here’s one of the tasty Laguna delicacies for you to enjoy! Espasol is also referred to as rice pudding in some circles.

Using rice flour, coconut strips, and coconut milk, it was molded into cylindrical shapes and served with coconut sauce. Then, they coat the Espasol in toasted flour before rolling it in it. Espasol was invented in Laguna, Philippines, and is still in use today. The towns of Alaminos, Los Baños, Pagsanjan, and Nagcarlan, Laguna are the locations where the most exquisite Espasol could be found. In Liliw, Laguna, you may get three packs for the price of one hundred pesos. There are a large number of vendors selling espasol in the many towns throughout Laguna.

Bibingka is a Filipino delicacy that is well-known throughout the world. In different locations or provinces, they have several Bibingka versions available. For example, when you visit Laguna, you must try their Bibingka, a delicacy not to be missed. In other bibingka recipes, rice flour, eggs, coconut milk, and grated coconut are used, with the final garnish of grated coconut. Optional toppings include salted egg or white cheese.

It was in Pagsanjan that one could find Laguna’s Bibingka. Their version of Bibingka is a departure from the traditional recipe. It is simple, but it is also tasty. Absolutely no garnishes, just pure and essential. What method do they use to prepare it? Instead of using a stove, they cook Bibingka in a clay pot, which is a traditional method. They put banana leaves in a clay pot and covered it with water. Hot coals started the fire beneath the surface.

Aling Emma’s store, located near the town plaza, across the street from Step-Rite in Pagsanjan, sells this delicacy. As a result, you should purchase it as soon as possible in the morning because it is usually sold out by mid-morning or earlier. 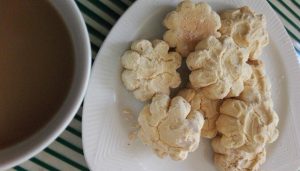 Uraro is sometimes referred to as Arrowroot Cookies in some circles. Uraro is similar to puto seko in this regard.

However, puto seko is significantly drier than Uraro. The shape of the product is that of a flower. The flavor is just right since it is neither too sweet nor too bland; it is just right. Arrowroot flour was used in the preparation of this delicacy. It has a low gluten level, which accounts for the powdery texture of the product. 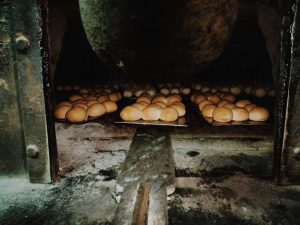 There is monay (dense, sweet bread), and then there is monay Bae (pronounced “ba-E”). Monay Bae is a type of monay that is dense and sweet.

Compared to other monay varieties, monay from Bay (pronounced like the English word “bye”) is larger and less sweet. The crust is unglazed and has a silky texture. Monay Bae also contains a few raisins, which contribute to the bread’s flavor and appeal. Every morsel is a mountain of goodness that you won’t be able to get anyplace else. Unfortunately, it is only available from Tenorio’s, a local bakery that has been baking it since the 1950s. 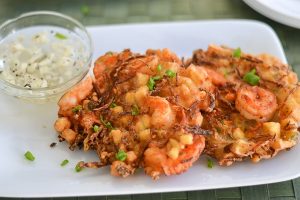 Okoy (sometimes written ukoy) is a traditional Filipino snack that is quick and simple to prepare.

It just calls for a handful of ingredients, all of which can be found at your local store. Shrimp, cornstarch, and peppercorn are just a few of the ingredients used in this dish. After that, the batter is deep-fried in a skillet until it is golden brown and crunchy. It is frequently served with vinegar as a dipping sauce, which is traditional. This meal is delicious, served either on its own or with rice.

Santa Rosa is not only famous for its natural wonders like hot springs, waterfalls, lakes, and others. Nor with manufacturing plants in its industrial estates. The place is also well-known for its native Laguna delicacies that are homegrown to Santa Rosa City. In addition, the various luxury homes for sale in Laguna by Brittany Corporation make a big difference.

Brittany Santa Rosa is distinguished by its large, sprawling trees and rich plains, which make it an ideal place for retirement and laid-back life. Brittany Corporation achieves a harmonious balance between structured society and its rustic environments.

These luxury homes for sale in Laguna are the perfect spots for those who want to make their dreams come to life. Visit Brittany Santa Rosa and start making your dream come true!