7 Most Beautiful Churches to Visit in Laguna

Churches have been built in the Philippines since the beginning of Catholicism. Many parts of the country are blessed with numerous gorgeous churches and fascinating stories to share.

Laguna is one of the communities near Manila with the most beautiful houses in the Philippines, fascinating history and culture that begs to be discovered. Nearly a hundred Roman Catholic churches may be found throughout the province, many of which have stood for centuries. We’ve compiled seven of the most beautiful churches in Laguna.

What are the most beautiful churches in Laguna? 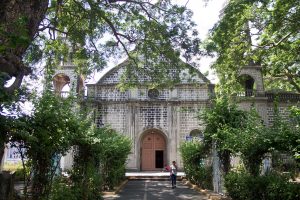 St. John the Baptist is where the national hero, Jose Rizal, was baptized. | Photo from Wikimedia Commons

Calamba Church is only an hour away from Manila. It is also near to the luxury homes for sale in Santa Rosa, Laguna which is good for its prime location.

The 160-year-old church is significant not only because of its age but also because of its historical significance. It was designated as a National Historic Landmark because it was the site of national hero Jose Rizal’s baptism. 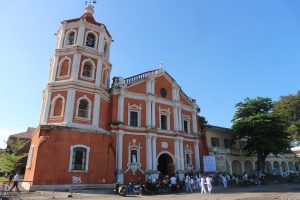 Also known as San Pablo Cathedral, this church was first built as wood then renovated as stone. | Photo from Wikimedia Commons

Suggested Read: Blast From The Past With These Historic Places in Laguna | Brittany

The stone church was built between 1618 and 1629 under the guidance of Fr. Hermando Cabrera. Renovations to the church and convent were carried out between 1839 and 1858 under the direction of Father Peregrin Prosper. The convent was severely destroyed during the liberation of the Philippines in 1945. Between 1948 and 1954, the church was renovated with the cooperation of parishioners under the guidance of Fathers Juan Coronel and Nicomedes Rosal.

It is thought to be the world’s sole church dedicated to Saint Paul the First Hermit.

San Pablo Cathedral is only a 30-minute drive from Hidden Valley Springs in Calauan if you’re looking for a tranquil vacation. And also luxury real estate for investment. 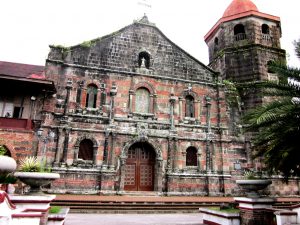 The church was partially destroyed by fire in 1781. Immediate restoration and rebuilding took conducted during the terms of Father Anatacio de Argobejo and later by Father Fernando de la Puebla, who designed the four-story brick bell tower. | Photo from Wikimedia Commons

The principal location of St. Bartholomew Church was at Nagcarlan, Laguna. The church was founded in 1578 by Franciscan priests Juan de Plasencia and Diego Oropesa. The Nagcarlan church was first built in 1583 under the chaplaincy of its first priest, Father Tomas de Miranda, utilizing light materials such as nipa and wood, and was dedicated to St. Bartholomew. Father Tomas de Miranda also pioneered wheat production in the province. During the tenure of Father Cristobal Torres, a second church made of stone and bricks donated by the people was completed in 1752.

The remodeling in 1845, under the leadership of Father Vicente Velloc, included the erection of the choir loft on three lofty arches and the use of adobe rocks. St. Bartholomew Church’s tiered wall is typically associated with Baroque design. The church’s façade design features a semicircular arched main entrance with semicircular windows, as well as towering pedestals and columns in the side entry. 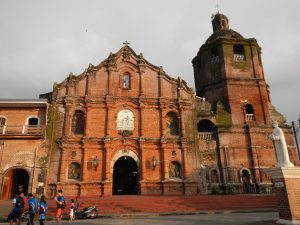 The church was first constructed of wood and subsequently reconstructed between 1643 and 1646 using adobe rocks and clay bricks. | Photo from Wikimedia Commons

The church, however, was damaged by the Luzon earthquake of 1880. It was reconstructed in 1885, but the church was regrettably damaged again in 1885, this time by fire. It was later reconstructed with the cooperation of its parishioners and the community, and they have worked together to conserve and restore this one-of-a-kind gem till now.

As you approach the cathedral, you’ll be greeted by three golden altars and be mesmerized by its forms. The main altar in the center has thirteen niches with saint sculptures, while the two smaller altars on either side have four niches with saint statues.

Saint John the Baptist Church is located in the heart of Liliw, a charming village with well-preserved medieval architecture. With the superbly maintained red-brick baroque building built in the mid-1600s, you can’t help but be transported back in time. Make a point of lighting a candle at Capilla de San Buenaventura, which is accessible by an unassuming arched passage to the left of the church entrance. 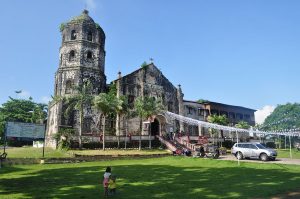 St. Mary Magdalene Parish Church is one of the town’s oldest Roman Catholic churches, located in the municipality of Magdalena, Laguna. | Photo from Wikimedia Commons

The church was consecrated to Mary Magdalene in 1821 and was fashioned entirely of cogon and wood at the time. In 1829, Captain Pablo de la Conception requested permission to build a stone parish, but his proposal did not meet the demands of the people, who were obliged to pay taxes, sand, and stone to be used as the primary material for the church’s reconstruction. The church’s construction began in 1839 and was completed in 1861, including the bell. Our national hero, Emilio Aguinaldo, sought refuge in this chapel during the Philippine Revolutionary War in 1898, and his blood was spilled here.

Magdalena Church is a relatively new church in comparison to the others on our list, yet it has witnessed one of the most pivotal times in Philippine history. Inside this 165-year-old stone church, you’ll find Emilio Jacinto’s shrine. It commemorates a time when the church offered refuge to one of Katipunan’s greatest warriors.

Magdalena is also close to surrounding natural sites like Pagsanjan Falls and Mountain Lake Resort, which are worth visiting for a day trip if you enjoy sightseeing and recreation. You may also view luxury real estate and the the most beautiful houses in the Philippines at Brittany Santa Rosa. 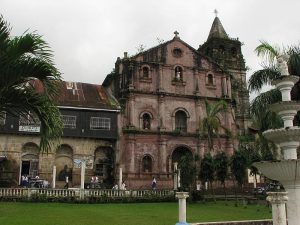 St. Gregory the Great Parish Church, popularly known as Majayjay Church, is one of Laguna’s oldest catholic churches, and is located in the municipality of Majayjay. | Photo from Wikimedia Commons

Laguna’s early Catholicism was founded by Majayjay. The original chapel, built by residents near the May-it river in 1575, was made of nipa and bamboo and was burned in 1576. The Franciscan Fathers Juan de Plasencia and Diego Oropesa began evangelizing the area in 1578. In 1599, the Superior Government approved the construction of a stone church. The fortress church was burned down in 1606 while it was being built. Majayjay also served as an infirmary for the elderly religious until it was relocated to Lumban in 1606. The church was partially burnt again in 1660. Rehabilitation began in 1711 and was finished in 1730 by Father Jose de Puertollano with the help of 14,000 people forced to work at a cost of $26,000. Majayjay residents worked for 19 years to finish the church, which is made of adobe stone with red tiles and high-quality wood. The St. Gregory the Great Parish Church, which was built in 1730, is one of the Philippines’ largest churches. The stone church was destroyed by a typhoon a century later, but it was repaired in the years that followed.

St. Gregory the Great Parish Church or the Majayjay Church was declared as a National Culture Treasure by the Natural Museum in 2001. It is one of the country’s oldest and best-preserved churches, having been built in 1649. This Romanesque church has aged gracefully, with natural overgrowth that only adds to its allure. Many religious relics, including an old church bell, are housed there. 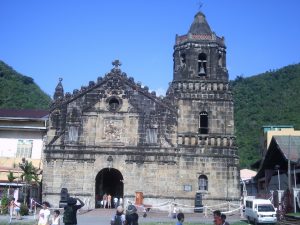 Paete Church, which was first built in 1646, has been through multiple earthquakes and repairs before becoming the historical, robust brick construction that it is today. | Photo from Wikimedia Commons

It protects four centuries-old paintings that have been designated as National Cultural Treasures. Three of the artworks were created by Paete resident Jose Luciano Dans; the oldest, by an unknown artist, is located near the altar.

Brittany Corporation would like you to see more of the beauty of Laguna. They offer luxury homes for sale in Santa Rosa that will bring you closer to nature, commercial areas, and also history.

Many people are likely familiar with Laguna as the birthplace of our national hero, Jose Rizal. More than that, Laguna has the most beautiful houses in the Philippines, home to luxury real estate, and boasts a plethora of fantastic attractions, including the well-known hot springs at Los Banos and Calamba, as well as the iconic Pagsanjan Falls. To top it off, Laguna Province is proud of its own trademarks, such as Liliw’s tsinelas footwear and Paete’s wood sculptures.

The province of Laguna is also a great place where you can invest in your dream house with luxury homes for sale in Santa Rosa and truly an excellent fit because it has many historically noteworthy churches that are well worth visiting.