Why Swarovski Crystals Are Expensive

Delving into high fashion, people have experimented with a lot of options when it comes to accessories. The right accessories make an outfit look complete, and sometimes they even call more attention to themselves than to the articles they adorn. One popular choice for the people who can afford them would be crystals. More specifically, Swarovski crystals.

The famous Swarovski swan in the company logo. | Photo from Joshua James Jewellery

Thinking about shining, shimmering, and splendid crystals without thinking of Swarovski is next to impossible, as Swarovski is the biggest name when it comes to the business of crystals. In fact, the fashion industry has become increasingly creative through the decades with their use of Swarovski crystals. One way an elegant person can wear them would be as a simple accessory, like as adornments on a necklace, a bangle, or a pair of earrings. Crystals look good not just as accessories, though. They look great when used to adorn dresses, too, from the neckline down to the train. Why use plastic beads, when one can be covered in crystals instead?

These crystals would be seen in even more items, such as shoes, phones, and animal figurines, among other sparkly things. They have transcended being just a status symbol and have become a staple for the greatest fashion icons. Wearing something as special, expensive, and shiny as Swarovski crystals, who would not feel like the belle of the ball? Crystals are bound to make the wearer one of the most visible attendees of any high-profile event. Celebrating parties and big event nights donning any crystal-adorned article would definitely be a highlight of one’s life. 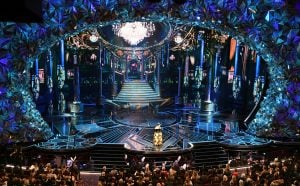 The 2018 Oscars display had 45 million Swarovski crystals. It was made by production designer Derek McLane and it cost $40-44 million. | Photo from Getty Images

One may be wondering, why are Swarovski crystals very expensive? Some products made with Swarovski crystals are even as expensive as luxury house Philippines. Imagine looking for properties for sale and luxury house and lot for sale, and then realizing that they are just as pricey as what you are wearing. The following sections of this blog will discuss just why the brand is so expensive.

What Are Swarovski Crystals

Swarovski crystals are really cut glass that are made of quartz sand, soda, and potash, among other ingredients. The company used to operate with leaded glass, but ever since 2012, they no longer produced their crystals with lead. One might be wondering that if Swarovski crystals really are just glass, then why are they so expensive? Well, the process of making these crystals are high-effort and complicated. Each crystal is cut, coated, and polished to produce the shine that it has, which is why it is valued very highly. They are made with heavy-duty machines and each is inspected by hand. Each crystal has 100 identical facets to it, so putting it side-by-side with crystals not from Swarovski, one would really notice the difference. Swarovski crystals have more brilliance to them than ordinary crystals.

The Swarovski company is based in Austria and actually has more than one business. Aside from their Swarovski Crystal Business, they also have Swarovski Optik and Tyrolit. Swarovski Optik produces optical instruments such as binoculars, telescopes, and hunting rifles. Tyrolit produces tools and machines, primarily for cutting. 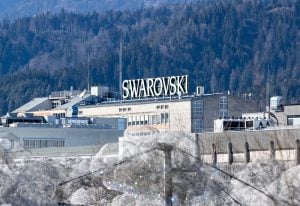 The Swarovski headquarters in Austria. | Photo by Johann Groder via Getty Images

The founder, Daniel Swarovski, served at a young age as an apprentice to his father, who was a glass cutter in his own small factory. He thought of using electricity in cutting glass objects. In 1892, he patented an electric cutting machine, which took him ten years to perfect, for the production of crystal glass. He did not actually intend Swarovski crystals to be purchased only by people living in a luxury mansion house. He wanted to make crystals affordable to the masses, but now Swarovski crystals are highly valued for their brilliance.

What Sets Them Apart

Sure, ordinary crystals can make one look rich, especially if they are authentic, but their opulence is no match to that of Swarovski crystals, which would definitely make you the most visible person even in a luxury mansion house, if you are wearing anything Swarovski. They sure fit the aesthetics of luxury house Philippines, which Brittany Corporation can definitely give you. Set yourself apart from others by checking out the company’s website for properties for sale, luxury house and lot for sale, and the most beautiful houses in the Philippines. Just like Swarovski crystals, luxury real estate is sure to make you a cut above the rest. 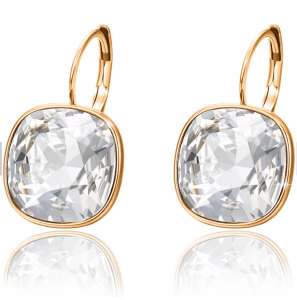 1. There should be no bubbles.

2. All 100 facets should meet and point upwards.

3. Each crystal should be identical in size and cut.

4. The crystals should look identical if they are part of the same color family.

5. There should be no surface scratches and oily sheen.

6. The crystals should be sold loose, not in a chain. Swarovski pearls can be sold strung together.

7. The shine should match that of a diamond.

8. They come in blue boxes with authenticity certificates. They should come from an authorized retailer.

These crystals are made through glass-cutting and not molding. Swarovski crystals may not be diamonds, but they are marketed as if they are.

The company sure knows how to market their products the right way, involving the biggest names in pop culture and the right brands. Swarovski crystals do not just appeal to the old moneys living in a luxury mansion house. The younger generations are also enticed by the luxurious brand, because of Swarovski’s marketing tactics.

They often do collaborations with luxury fashion brands, such as Dior, Chanel, and Balenciaga. They are also often seen in the biggest movies and award-giving nights. One would recall Audrey Hepburn, one of the biggest fashion icons, wearing a tiara in the movie Breakfast at Tiffany’s, and this piece is actually a Swarovski creation. Another female actor from vintage films who wore Swarovski was Marilyn Monroe in Diamonds Are a Girl’s Best Friend. Do not be fooled by the title, though, because she was really wearing Swarovski crystals, not diamonds. She greeted John F. Kennedy with her song “Happy Birthday, Mr. President” in a dress encrusted with 2,500 Swarovski crystals, which is considered the most expensive dress in the world and sold for 4.8 million dollars.

Rihanna will also not be forgotten when she accepted her Fashion Icon of the Year award in 2014 at the Council of Fashion Designers of America fashion awards. She wore the naked dress designed by Adam Selman, which had a total of 230,000 Swarovski crystals. One would think that the dress weighed a ton, but Selman said it ended up being lightweight and liquid, making Rihanna shine bright like a diamond when she accepted her award. 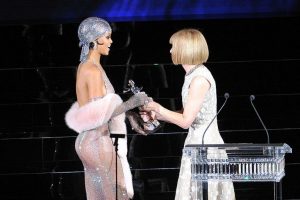 Another modern fashion icon who donned a Swarovski creation is Kylie Jenner. In her 21st birthday celebration, she wore a pink jumpsuit with 70,000 Swarovski crystals, which is said to be worth $8,000. Her sister Kendall Jenner also wore a Swarovski dress during her 21st. Kendall’s is said to be inspired by Paris Hilton and is worth around $9,000. People always tune in to what the Jenners and the Kardashian wear, and for them to wear Swarovski in the biggest events of their lives would say a lot about the brand.

Swarovski is also known to dazzle lingerie, when it comes to women’s fashion. They have a 15-year partnership with Victoria’s Secret, which is why in some of their shows, the Victoria’s Secret angels are seen bedazzled with Swarovski crystals, from their gigantic wings to their underwear.

Like a lot of other luxury fashion brands, Swarovski also has some dark moments in the past. They made some questionable choices during the Nazi period. Six members of the Swarovski family were active members of National Socialism. Majority of the participants in a protest in support of Hitler were discovered to be Swarovski plant employees and among them were even three Swarovski heirs — Alfred, Wilhelm, and Friedrich. Alfred was known to be loyal to Adolf Hitler and was a member of the Nazi Party.

They also had an issue concerning forced labor in teenage girls in the 60s. This was back in the days when teenage mothers were taken into care homes. They were forced to work all day, doing menial work for the company, and they received almost nothing for the work they did. In 2006, The Observer said that Swarovski used child labor in their production process.

In their business Swarovski Optiks, they produce gun accessories, and they were known to be a sponsor of the pro-gun lobby in the United States. They had ties with the National Rifle Association, too. They were criticized by anti-gun activists, because the guns they help produce were used in hunting animals.

Part of the reason why Swarovski is successful is because they release a wide variety of products. One can think of the most mundane things in his luxury house Philippines and imagine it covered in Swarovski crystals, and hope that the company might have one to offer. Some of the company’s unconventional products include animal figurines, smartphones, Nike shoes, statues, pianos, espresso machines, and sex toys. They even have a crystal-encrusted toilet that would definitely go well with luxury real estate. Check out Brittany Corporation for properties for sale and luxury house and lot for sale, and see the most beautiful houses in the Philippines where you can display all your Swarovski-covered luxury items. These designs may be unnecessary, but it is one way of turning something basic into something special. 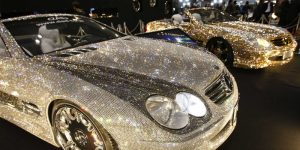 The coveted Swarovski crystal-encrusted cars from Mercedes-Benz. | Photo by Toru Hanai via Reuters

One more outrageous Swarovski collaboration would be when they partnered with Mercedes-Benz to produce two crystal-encrusted cars. They were presented by a custom car company called Garson/D.A.D. in a Tokyo exposition. The cars were limited edition and they came in silver and gold. Each had 300,000 crystals and cost $4.8 million.

Swarovski did not become successful for nothing. They sure know how to impress their target audience with their creative works, eyebrow-raising collaborations, and crystal-encrusted events. They are not the only manufacturers of crystal glass, but they set themselves apart from the others by putting in a lot of hard work into their creations and thinking ahead of everyone in producing things that one can only dream of having crystal-covered.

Their attention to detail is impeccable and they literally make events shine whenever Swarovski crystals are in the room. They may not use precious stones in their projects, but the effect is just the same, what with the splendor of their crystals and all. Swarovski crystals are specially made and that is why they are expensive. They produce pieces worthy of being kept in luxury real estate and the most beautiful houses in the Philippines.