Iconic Travel Spots to Visit in the Philippines

Filipinos are famous for being hospitable and resilient. Filipinos have a lot to offer, with over 7,600 islands that cover the Philippines. Travelers from all over the world come to the Philippines to explore the country’s rich beauty and culture. Its landscapes are home to many natural attractions, including volcanoes, rice terraces, underwater rivers, limestone caves, and stunning beaches. Are you a traveler looking for Iconic Travel Spots to visit? Continue reading because we will guide you to the most Iconic travel spots to see in the Philippines.

Individually, the islands each have something unique to offer, whether you’re looking for the best diving and snorkeling spots or want to visit places with strong colonial roots like Manila or Vigan.

Intramuros, one of the most iconic travel spots to visit to experience the Spanish colonial period in the Philippines, is a great way to learn about and appreciate the country’s rich history. Intramuros, with its old-fashioned elegance, is also a romantic backdrop for a date.

Intramuros was built by Miguel Lopez de Legazpi during the Spanish Colonial period and was destroyed by the end of World War II. On the other hand, the ruins are still very much alive today and maybe explored on Intramuros tours. The Intramuros, or walled city, is home to many of the city’s most notable tourist attractions, sites, and monuments.

Several universities and institutions have established themselves in the area. The majestic Manila Cathedral and San Agustin Church, the Philippines’ oldest church, are centuries-old churches.

Fort Santiago, a stronghold that served as a headquarters for troops and foreign powers, is another Intramuros attraction. It is a historically historic location where Dr. Jose Rizal, the national hero, was imprisoned before his execution.

The Sagada Hanging Coffins are undeniably one of Mountain Province’s most prominent tourist attractions. Visiting this ancient world burial place requires a short stroll, but you will have to pass through an American-influenced cemetery named Echo Valley, which is set on a mountaintop. 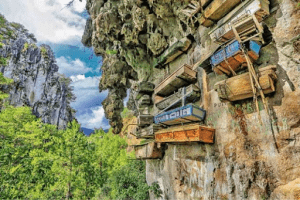 Hanging coffins have been suspended from cliffs as part of the Sagada people’s Igorot indigenous culture and burial tradition. Although this old tradition is also practiced in some parts of the world, like Indonesia and China, the Philippines has its distinct culture.

Each cadaver was smoked over the 5-day pre-burial feast to avoid speedy decomposition. Coffins are built of hollowed-out logs that are generally crafted by the elderly Igorots before they die. The traditional method of burial for a qualified individual is to hang the coffins in high elevated cliffs. Pushing the bodies into the narrow gaps of the coffin for them to fit into the coffin space created from Pine tree planks is also part of the indigenous death ceremony. In Sagada, the Igorot ancestors believed that the higher your body was laid, the closer you were to ‘heaven.’ Another motivation was to keep the bodies safe from natural calamities like earthquakes and floods, as well as from wild animals.

The rice terraces at Batad were erected 2000 years ago and contain stone walls instead of mud walls in other parts of the province. Farmers worked these fields for generations, practicing remarkably similar methods today as they were first built. It’s beautiful to witness such consistency in farming operations over such a long period. And it’s incredible to think that what their forefathers built all those years ago is still paying off now, A remarkable legacy that will be passed down for many generations. 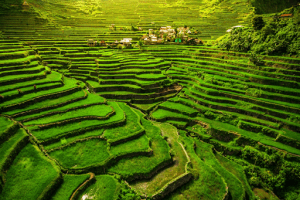 In Banaue, seeing the Batad rice terraces at sunrise is a once-in-a-lifetime event. Landscape photographers who want to produce stunning shots of Philippine agriculture should try this out. Some of these terraces are almost 2,000 years old and represent a traditional farming method in the country.

One of the most famous waterfalls in the Philippines is Pagsanjan Falls, also known as Cavinti Falls (local name: Magdapio Falls). The falls are one of the region’s most popular tourist destinations, being in the province of Laguna. A river ride on a dugout canoe, known locally as Shooting the rapids, is required to reach the three-drop cascade, which originates in the Pagsanjan municipality. A short hike from Cavinti will get you to the waterfall. 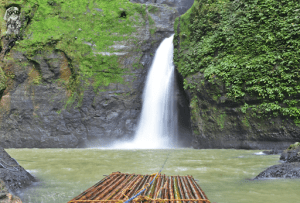 The Shooting the Rapids boat cruise, which departs from any of the resorts along the Bumbungan and Balanac Rivers, is the most popular method to see the falls. Two competent and licensed boatmen transport one to three guests to the falls in long, narrow wooden or fiberglass canoes, which may take more than an hour to paddle upstream depending on traffic and water level. Passengers will go through the narrow and lush Pagsanjan Gorge, lined with massive boulders, rocks, and little waterfalls. The upstream ride stops in a natural pool below the falls, where guests can take an optional raft ride through a curtain of cascading water to the Devil’s cave beyond the falls. Shooting the Rapids, the return trip, is a thrilling ride through fourteen rapids as the skillful boatmen navigate the boat through the narrow rocks as it heads downstream.

SUGGESTED READ: How to do Luxury Travel with Kids | Luxury Homes by Brittany Corporation

The provinces of Benguet, Ifugao, and Nueva Vizcaya are all bordered by Mount Pulag. It is the Philippines’ third highest mountain and the highest peak on the island of Luzon. There are around 500 plant species on the hill. The dwarf bamboo, for example, is a mountain endemic. It also holds several endangered mammal species. Mount Pulag is a naturalist’s dream come true. 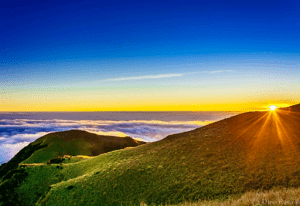 Mount Pulag, as Luzon’s tallest peak, attracts a large number of mountain climbers. The alpine forests and the grassland peak with its “sea of clouds” phenomena highlight the climb. The Ambangeg, Akiki, and Trawangan paths from Benguet and the Ambaguio trail from Nueva Vizcaya are the four major trails that lead to the peak. The Mount Pulag National Park, controlled by the Department of Environment and Natural Resources, is in charge of these paths.

The tale of the Temple of Leah is similar to that of the Taj Mahal, an Indian mausoleum created as a symbol of eternal love. Teodorico Soriano Adarna’s devotion to his late wife Leah Albino-Adarna, a life companion for 53 years, is the Temple of Leah. They own the Queensland motel business in Cebu and are the grandparents of Filipina actress Ellen Adarna.

The temple is said to be made up of 24 chambers, including an art gallery, museum, library, and bar, as well as life-size statues of Roman gladiators, lions, and angels adorning the walls. A set of large stone steps leads up to the entrance and into the foyer, where a brass 10-foot statue of Leah stands. 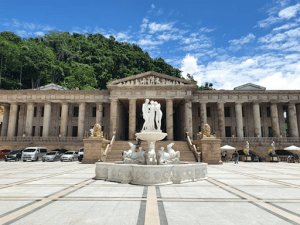 The temple’s construction located in Cebu City’s highland barangay of Busay started in 2012 and is expected to be finished by 2020. Though the building is still ongoing, the place is already open to the public from 6 AM to 11 PM with an entrance fee of Php50 per person. 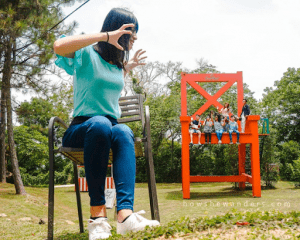 Photo by How She Wanders

Along with the cafes in the area, Brittany built a giant throne chair like Geneva’s chair sculpture that is very famous to those who visit Crosswinds. It’s one of the many photo-worthy locations that tourists like. This adds to the enjoyment and thrill of their stay at Crosswinds.

Tagaytay is well-known for its cool, breezy weather, in addition to the magnificent Taal Volcano and mountain ranges. Because it is only a few hours from the metro, it is ideal for fast getaways. Crosswinds is a Swiss-inspired community with over 35,000 pine trees that spans 100 acres. This neighborhood is recognized for its high-end residential complexes. Crosswinds Tagaytay also has a 365-day Christmas celebration, which is even longer than the national holiday. As a result, it’s the ideal country vacation spot!

Christmas is about to come, and we know that you are now planning to spend the holidays with your family. Have you listed down Iconic Travel spots to visit yet? The Philippines has a lot to offer. You can choose whether beach, adventure, or historical places.

What are you waiting for? Crosswinds is expecting your arrival to share all of these Christmas adventures with your loved ones. This Christmas season, there’s no better spot to go than the ones that make you feel enchanted!