South America’s multicultural fusion of iconic dishes has a wide range of influences. Native Americans, Africans, Spaniards, Italians, Portuguese, and Indian-South Asians are the most distinctive. However, a blend of European, North American, and indigenous cuisines can be found. Customs and food products differ greatly depending on the geographically varied locations.

Food is not rational. Food is culture, habit, craving and identity.

Travelers to South America will have wonderful culinary experiences from the abundance of iconic dishes in the region. It’s a good bet that no matter whatever country you visit, you’ll find something to thrill your taste buds, whether you prefer sit-down dinners or on-the-go treats from street vendors. These ten dishes are among the most popular, and delectable dishes to sample across the continent. Are you all set to pack your belongings?

Ceviche is a perfect flavorful appetizer and a healthy meal.

This renowned seafood dish originated in Peru and has since spread throughout the South and Central American coasts. Fresh, raw seafood (typically a type of white fish from a certain location) is cured in citrus juice (lemon, lime, or Seville orange), spiced up with jalapeño peppers, and topped with onion and cilantro. If you enjoy sashimi, you’ll adore this dish. Ceviche is a healthy Peruvian dish that is usually served as an appetizer.

The lusciously sweet dulce de leche is a classic South American confection that’s used in a variety of dishes. Served with everything from doughnuts and muffins to toast, the creamy caramel is made by simmering milk, sugar, and sometimes vanilla. It’s difficult to come by outside of South America, and many people who try it for the first time fall in love with it right away. Bring some home to sate those post-vacation hunger pangs.

Empanadas are one of the most popular dishes in South America.

One of our favorite South American foods is empanadas. They’re basically little pies in the shape of a croissant. They are dough-based and loaded with a variety of usually savory contents. While empanadas are a common South American dish, Argentinian empanadas are often regarded as among the greatest in the world.

In Argentina, empanadas are either baked or fried. Empanadas salteas, from Argentina’s Salta Province, are recommended. These are baked without the use of any added fats or oils. These delectable pies are flavorful and easy to eat in just two bites.

Arepas are one of Venezulea’s most iconic dishes and can be found all around the country. They can be found in a variety of places, from street kiosks to sit-down restaurants. Arepas, or corn cakes, are a typical Venezuelan and Columbian dish.

This flatbread sandwich can be loaded with almost anything, from cheese to meat to eggs, and is constructed from crushed maize dough or baked flour. The number of arepa variants on a single menu can reach double digits depending on where you go. The heartier choices can be served as a main meal, while the smaller, less complex arepas are ideal for snacking.

The pastel is a crispy pastry loaded with a variety of ingredients that is thinner than an empanada. Melted cheese, ground pork, hearts of palm, and little shrimp were all popular ingredients for these wonderful fried pies. Though pastels are mostly salty, sweet varieties with guava jam or chocolate are available.

The star ingredient of Chivito sandwich is a slice of churrasco. 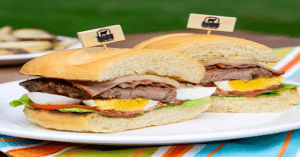 The star ingredient of Chivito sandwich is a slice of churrasco.

Uruguay’s national sandwich and dish is the Chivito. According to legend, an Argentine visitor stopped by a restaurant in Punta Del Este (Southern Uruguay) and requested “chivito” (baby goat meat) similar to the ones she had in Argentina.

Not wanting to lose a customer, the restaurateur accepted the request and proceeded to create her a churrasco (steak) sandwich with everything but the kitchen sink. She becomes a fan, and the sandwich earns a permanent spot on his menu under the name chivito, later becoming Uruguay’s national sandwich.

This is a colossal and utterly delectable sandwich. It consists of thin churrasco slices with bacon, mozzarella cheese, tomatoes, lettuce, mayonnaise, ham, olives, and a fried egg on top.

This is a carnivore’s dream, rich and hefty.

Llamas are tamed animals that have been used by the Andes people to deliver goods for thousands of years. Socks, gloves, and scarves are made from their wool.The meat of llamas is used in regional dishes in northern Argentina, despite their popularity for their wool.

Llama meat is a healthy meat because it is high in protein and low in fat. One of the most popular llama delicacies in the region is cazuela de llama.

Llama meat is flavorful and excellent. The meat is broken into pieces and slowly stewed in a stew with carrots and papas andinas(native potatoes) in the Cazuela de llama.

If you’ve never tasted llama meat before, you should give it a try. The delicate beef and flavorful aromas in the cazuela stew will delight you.

Chile’s fishing industry is an important one, and it is one of the world’s largest exporters of fish and seafood.

The Reineta is one of our favorite and most popular fish to try (Pomfret or Southern Rays Bream). This fish is mild and solid, making it ideal for grilling, broiling, or sautéing.

Reineta was a favorite of ours in Chile, especially along the Valparaiso shore. In the sweltering weather, this is one of the South American foods you’ll adore.

This delicate and flaky fish is a must-try on any trip to South America.

Pisco sour is an alcoholic drink of Peruvian origin. 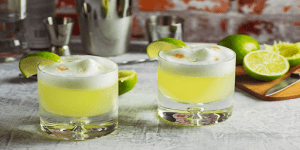 Pisco sour is an alcoholic drink of Peruvian origin.

The Pisco Sour is a popular cocktail in South America, but it is also the national drink of Chile and Peru. Pisco, a brandy produced in both Chile and Peru, is combined with egg whites, Angostura bitters, lime juice, simple syrup, and ice to create this cocktail. Different fruit juices are used in Pisco Sour variations to change up the flavor. Many people say it goes well with ceviche, so try both when you’re in Peru.

Argentina is known for its shameless carnivores, yet chorizo is one of the country’s most delectable meats. This sausage may be found on the menus of almost every Argentine restaurant, as well as enticing you with its inimitable smokey aroma at every street stand. Chorizo has found its way around the world, but don’t miss out on the opportunity to eat it in its homeland.

Iconic Dishes are a universal experience that brings us all together

It’s exciting to visit a new country or region of the world. Visiting museums, as well as cultural and historical attractions, will help you have a better understanding of the area.

When you travel through cuisine, particularly local and authentic meals, you get a feeling of the history, culture, and a stronger connection with the locals.

A Luxurious Lifestyle with the Best Experience of Iconic Dishes

Traveling in this times were really hard and unsafe, so Brittany Corporation offers you the first thematic community in the Philippines. Brittany Santa Rosa will let you indulge into the American South lifestyle completely.